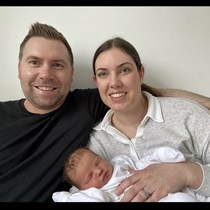 Weʼre raising £10,000 to Fund raise for our beautiful ukraine surrogate and now made refugee Vita

Fund raiser for our beautiful surrogate Vita, her son 3 year old Nazar and partner Andrea along with their family pet, small pug dog Musa much loved by their son.

We want to raise funds for travel, living expenses and to set up a home life in the U.K because they have lost everything due to the war in Ukraine.

* Heather Easton, 32, is trying to help the Ukrainian surrogate who bore her baby

* She and husband Mark, 39, of Rugby, Warwickshire, had baby Sophie in January

* Surrogate Vita Lysenko, 35, fled Kyiv with her husband and their three-year-old

Heather and Mark Easton travelled to Kyiv in January to pick up their daughter Sophie after suffering eight years of fertility heartbreak.

They returned to Britain on February 9 – just a fortnight before the invasion – and have since been trying to help surrogate Vita Lysenko, 35, her husband Andrii Shemshur, 62, their son Nazar, three, and family dog Musy find safety in the UK.

Mrs Easton has found a sponsor who has offered the Ukrainian family an apartment to live in just a few minutes from her home in Rugby, Warwickshire.

But after driving for six days to Brussels, the Ukrainians have been left stranded by bureaucracy because Miss Lysenko and Nazar do not have passports.

Their debit cards have also stopped working, leaving them just 20 euros in cash left to live on. The family had their details processed in Brussels yesterday, but must wait for around a week for their visas. In the meantime, a hotel is letting them stay for free until the end of March.

Heather and Mark Easton, 32 and 39, from Warwickshire, with their newborn daughter Sophie who was born via surrogate in Ukraine on January 27

Mrs Easton, 32, a former nanny, said: ‘The Government are not helping refugees enter fast enough. They are putting obstacles in their way that could be tackled once in England. It’s careless to leave them without homes.

‘I’m extremely grateful to Vita, our surrogate. I say to her, “You saved me. And now I save you”. I could never see her go homeless. She needs help and I don’t want anything bad to happen to her.

‘I’m so glad we managed to get out before the war began, but I worried about Vita every day.’ Mrs Easton and her 39-year-old husband, an HGV driver, spent eight years trying to have children. However, after going through six unsuccessful rounds of IVF, Mrs Easton had to have a hysterectomy last year due to endometriosis.

They found Miss Lysenko in Ukraine, where commercial surrogacy is legal, and paid tens of thousands of pounds for her services. She had Sophie on January 27. After the invasion, Mrs Easton persuaded Miss Lysenko and her family to leave. The couple bought a £4,500 car, packed up their lives, said goodbye to their parents and left last Tuesday.

"Surrogate Vita Lysenko and her son Nazar, three, spent a week driving across Europe to flee the war in Ukraine. They are stuck in Brussels unable to get a visa appointment"

They spent six days driving from Cherkasy, central Ukraine, to Belgium via Poland and Germany

Miss Lysenko, 35, said she feels ‘broken and helpless’. The surrogate, who has also carried twins for a Chinese couple, added: ‘We’ve been on the road for a week.

‘We are safe and I am glad that we are alive and healthy, but we are very worried about whether the UK will let us in.’

A Government spokesman said: ‘We are moving as quickly as possible to ensure those fleeing persecution in Ukraine can find safety in the UK. The Home Office has acted to increase capacity at visa application centres, with 13,000 appointments a week across Europe. This will help Ukrainians without passports, such as this family.

‘Those with passports no longer have to attend in-person appointments before arriving in the UK.’

All donations will go towards: Food Clothing Personal Items Car repair and running costs School supplies and clothes Furniture Deposit for rent Dog food Medicine Any other essential items required for establishing a life here in the UK