Weʼve raised £1,060 to ensure the participation of refugees in the biannual conference of the International Association for the Study of Forced Migration (IASFM18)

'Nothing about us, without us'

We are living in turbulent times within which the issue of forced migration and the subject of ‘the refugee’ have become deeply symbolic of broader processes of political, economic and social change.

This is reflected in the politicization of migration by countries in both the Global North and South. Against this backdrop, scholars and advocates working with and for refugees and other forced migrants, as well as refugees themselves, are finding it increasingly difficult to get their voices heard and to mobilise effectively. Whilst there are many initiatives globally these often struggle to become more than the sum of their parts. Most importantly, it is often difficult - if not impossible - for refugees, including refugee scholars, to secure a platform to talk about their experiences on their own terms drawing on their own experiences and understanding of the situations in which they, their families and their wider communities find themselves and to challenge the ways in which they are positioned within local, national and international political and policy narratives.

The title of the forthcoming conference of the IASFM – ​‘Disrupting Theory, Unsettling Practice: Towards Transformative Forced Migration Scholarship and Policy’ ​– represents an attempt to engage forced migration scholars and others directly in addressing these questions. The conference will take place at the University of Ghana in Accra from 27th-30th July 2020. This is one of the world's largest conferences on forced migration and we are determined that refugees should play an central role in the event: too often we only hear the voices of refugees via a poor Skype connection with an emphasis on the problems and difficulties that they face rather than the resilience, agency and creativity they draw upon to rebuild their lives under difficult circumstances.

Over the past year we have been working with a group of Liberian refugees living in, or otherwise connected to, the Buduburam refugee camp on the outskirts of Accra who have organised themselves into a group called Voices of West African Refugees (VOWAR). The members of VOWAR have been meeting on a regular basis to decide what they would like to say, how they would like to say it and what they want the conference participants from around the world to hear. They will lead a half day of the conference which will include a plenary session entitled 'Hanging in the Air: The experiences of Liberian refugees in Ghana', two panels sessions drawing on the arts and lived experiences to explore the every day lives of refugees in Ghana and their hopes and aspirations for the future, and a cultural programme which includes a Liberian gospel choir and dance troupe. We now need to raise funds to cover the costs of food, travel, costumes and other expenses associated with the community's preperations for, and participation in, the event. The funds will cover the following costs:

- Local transport costs to enable refugees living in and around Buduburam to meet on a regular basis to prepare for the event;

- A small allowance for food and water for those attending the meetings and rehersals;

- Money for costumes and T-shirts for members of the choir and children who are part of the dance troupe; and

- Buses to bring around 80 refugees from Buduburam to the University of Ghana campus in East Legon on the day of the conference, providing them with water and refreshments throughout the day.

All monies raised will go directly to the community. Any additional funds will be used to support the development of VOWAR and activities undertaken by the group to ensure that refugees living in Buduburam and elsewhere in Ghana are able to have a voice. 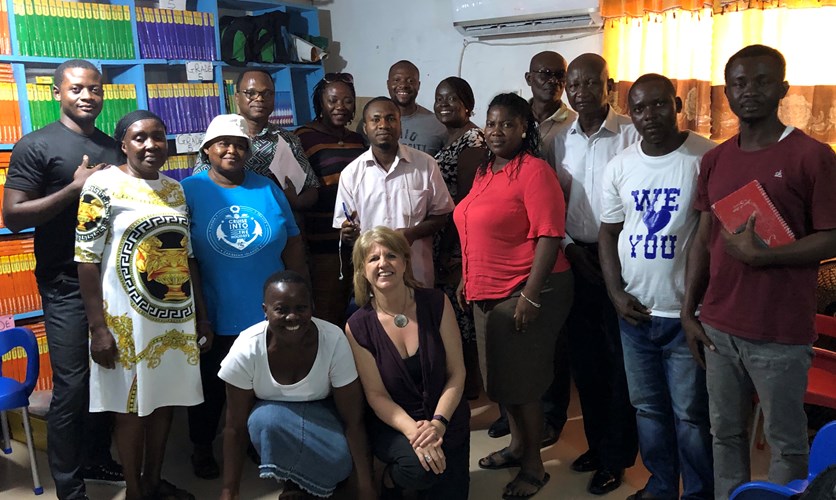 Heaven has undertaken research with refugees for nearly 30 years in order to better understand the experiences, identities and aspirations of those forced to leave their homes - and often their countries - in search of protection and a better life. She is a co-covener of IASFM18.