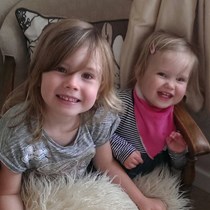 Weʼve raised £388 to help support the cancer treatment available in Germany that the NHS can't offer a friend of ours.

Alison is 38, a teacher, wife, sister, daughter, friend and mum of 2 children, Finley and Scarlett.

In March 2013 she was diagnosed with breast cancer when Finley was just 18 months old. She had to stop teaching to have an operation to remove the tumour and started chemotherapy and radiotherapy.

Treatment went well with no signs of spread of the cancer. However the cancer was a rare aggressive type, triple negative breast cancer, TNBC.

In 2015, just a week after her 2nd child, Scarlett was born, Alison found out the cancer had spread, to lymph nodes, below her collar bone and down her chest wall.

Not a good diagnosis and now stage 4, Alison was told she could have just months left to live. She immediately started further treatment, juggling chemotherapy, radiotherapy a new baby and a very active 4 year old.

That July a CT scan showed she was in full remission.

Cruelly, only 3 months later the cancer had returned but now to her lungs as well as under her armpit.

An immunotherapy trial was started which after a few months unfortunately she found out was not working and the tumours were still growing.

The NHS have now offered a further course of chemotherapy which cannot cure her but will hopefully give her a little more time with family and friends.

After their own research, Alison and her family have found treatment available in Germany for a potentially lifesaving targeted treatment for TNBC which unfortunately is not available on the NHS.

Alison has been accepted as a good candidate for the treatment, however as the treatment is so expensive her family and friends are trying to raise money to pay for it themselves.

To try help raise as much money as possible towards Alison's treatment I will be running the Great North Run half marathon. Please share what you can to support her as much as possible. Thanks.