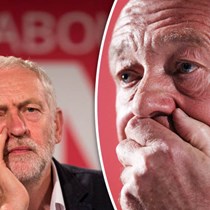 We're raising money to fly a plane over Wembley on April 23 at the Arsenal v Man City FA Cup semi-final with the message: Expel Ken #CorbynOut

Whether you're supporting Arsenal or City that day, or Chelsea or Spurs the day before, or any other club, whether you're Jewish or not, this is a message that all genuine anti-racists can get behind.

You can be a part of it: donate now!

The Labour Party has no future under Jeremy Corbyn. That's tragic for Labour and leaves the country without a proper opposition.

Ken Livingstone has spent years going out of his way to pick fights with Jews. Banging on about Hitler “supporting Zionism” is not “criticism of Israel”. It is a lie, and an attempt to humiliate Jews by associating them with Hitler. Yet he remains a Labour member.

Under Corbyn, Labour’s persistent tolerance of Livingstone is a symptom of a wider problem. Corbyn is a friend of dictators and terrorists. He’s met Assad and he opposed action against his chemical weapons; he has history with Assad’s backers, Iran, Russia and Hezbollah.

Corbyn likes to say he's an Arsenal fan. Earlier this year, Arsenal fans flew planes with rival WengerOut and Respect AW messages. WengerOut is now a global meme seen randomly at demos and events worldwide. But Corbyn is no Wenger.

Even if you think it's time for Arsene to bow out, the guy's won 2 doubles and pulled off an unbeaten title triumph, albeit a long time ago. Under Corbyn, Labour have never been out of the relegation zone and are heading for the drop.

Enough is enough. He needs to go. #CorbynOut.

Say No to Racism. At the Arsenal v City semi-final let's spell it out high above the Wembley sky to a global television audience: Expel Ken #CorbynOut

* If the event is cancelled due to issues beyond the control of organisers or pilot, such as weather, safety and relevant permissions, you will be refunded

A former Labour voter and ex-member