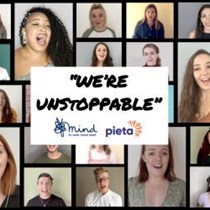 ABOUT THE PROJECT The song was written in response to the feeling of helplessness that many artists are feeling right now, with projects unavoidably cut short or cancelled altogether. We wanted to write something hopeful about the power of living in the moment - a sentiment which has wider reaching meaning than for our industry alone. The song has been recorded in the homes of over 40 different artists across the UK & Ireland, with a range of West End performers and recent Drama school grads, all of whom have been deeply affected by the current crisis.

ABOUT THE CHARITIES We're raising money for Mind UK and Pieta Ireland - two incredible mental health charities who are in need of extra funds in light of the Covid-19 crisis and the added strain this is putting on services. As the creative are from both Ireland and the UK it was important for us to support charities from both. You can read more about their work at Mind and Pieta