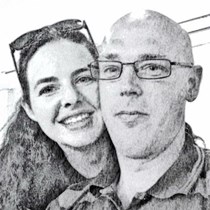 Weʼve raised £14,805 to Help fund new specialised physiotherapy equipment to assist Wesley in his recovery from a Stroke.

The Wesley we all know

Wesley has always been an outgoing young man, he loves his sports both playing and watching, he is a key member of the Buccaneers Rugby club whom he has played for, for the last 8 years after joining from the Colts. As a youngster he was into his swimming and extremely good at it and could have gone on to great things but alas the green pitch won his heart.

Upon turning 23 Wes joined the Gibraltar Defence Police, with a promising career ahead of him. He had recently applied and been accepted to become a GDP Dog handler, which was a role he was thrilled to have been given. His love for animals especially dogs meant he could enjoy his working day with man’s best friend.

All was going well until the early hours of Saturday 29th August 2020 when at the young age of 25 he suffered a sudden Ischemic Stroke during the early hours of the morning, this has left him with a damaged left hand side of his brain. This side of the brain controls such things as speech, right hand, arm and leg movement, logic, sequencing, linear thinking, mathematics, facts & thinking in words but to name a few.

Wesley has already started his rehab journey and is pushing himself hard to improve his current condition and hopes he will gain much of his normal functionality allowing him to become independent.

Due to the amount of damage caused by the stroke his Rehabilitation is going to be a long and arduous process. With his positive attitude and great therapists he is starting to make small breakthroughs. Wesley is going to need a variety of equipment to help him reach his goal of self-sufficiency, the type of equipment he will need is not fully known yet until he completes his initial rehab and physiotherapy. On return from the rehab centre his rehabilitation will continue at home where it will become more apparent what equipment will be required.

I've shared some links showing some types of the equipment that stroke survivors would use to help with their rehabilitation and daily life. https://www.mobilitysmart.co.uk/foldalite-trekker-folding-electric-wheelchair.html https://www.medimotion.co.uk/motomed-movement-therapy/ https://www.stroke.org.uk/ https://www.neofect.com/us/blog/stroke-rehab-products-gadgets-for-stroke-survivors