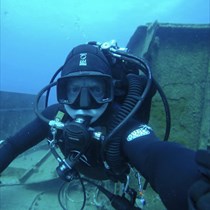 Expedition W.E.T.'s main aim is straightforward: travel from Lochs Carron and Duich, the Llŷn Peninsula to Pembrokeshire, linking up with 3 critical conservation projects that are in desperate need of more publicity and funding.

The expedition will dive into many of the most spectacular coastal dive sites along the way. We aim to do this in a minimalist way, camping and cooking out of the back of our cars and vans.

We will be joined by a marine biologist that works with each of the projects and establish a storyline for a series of feature articles commissioned by Simon Rogerson the editor of SCUBA magazine and short films for YouTube.

The 3 projects and an idea of what any money raised would be used for are:

Shark and Skate Citizen Science Scotland headed up by Dr Lauren Smith, is a group set up to obtain important data about the various elasmobranch species found in Scottish waters.

They record sightings (both alive and deceased), and behavioural observations. Citizen Science such as this can be fundamental in furthering our understanding and will further inform our understanding about their biology, behaviour and habitats, the more effective our conservation and management can be.

Project SeaGrass headed up by Jake Davies, is an environmental charity devoted to the conservation of seagrass ecosystems through education, influence, research and action.

• £10 will fund the collection, processing and planting of one bag of seagrass seeds.

• £100 will fund the annual updating, development and running of our SeagrassSpotter.org Citizen Science Programme

• £1000 will fund a seasonal Seagrass-Watch monitoring programme for 12 months with volunteers.

Neptune’s Army of Rubbish Cleaners (NARC) headed up by Charlie Young, are an award-winning charity helping to keep the underwater world litter-free since 2005.

All funds raised will be split equally between each of the 3 projects and not used to fund the expedition.

My introduction to diving was joining a military sub-aqua diving expedition to the Canary Islands. There, we studied Angel Sharks as part of a conservation project. I have since become an experienced Diver, Instructor, Supervisor and Expedition Leader.