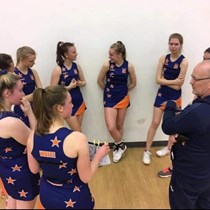 "White Cross Netball were extremely sad and shocked to hear the sudden death of one of its beloved volunteer coaches and team managers Graham earlier this year.

Graham was one of a kind who started his association with the club as a Netball Dad. The respect, friendship, loyalty and commitment he showed to the then fledgling club, caught the eye as did his growing love for the game of netball and interest in the finer details of it.

Graham's background was rugby but he soon showed how transferable all that knowledge, experience and coaching skills were. He became the manager of what are now our U18s.

It's no coincidence that when Graham managed the team, the potential started to be realised, the wins happened and the teams were successful. Graham believed in the players and worked hard, very hard, swapping shifts so he could be present at training and matches. He attended meetings, courses, conferences and travelled here, there and everywhere, all in his own time and expense. He looked out for his players well-being and made sure they managed their injuries properly and in turn the players started to believe in themselves and what they could achieve in the game if they worked hard. They started to play for each other, the team and for Graham. The players were confident, bubbly, looked forward to their netball and above all enjoyed it.

When our national team, the English Roses' star began to rise; Graham was unwavering in his support and love for the Australian Diamonds, which included bunting. When in April 2018 the Roses won Commonwealth Games Gold in the Diamonds backyard, Graham did not falter.

He will be sorely missed and fondly remembered especially as we commence a new era in netball. For those of us lucky enough to have come into contact with him, him made our lives richer and you made our club better and for that we will be forever thankful. "

Receiving the devastating news about the death of Graham really shocked and saddened us. We appreciate not everyone knew him but the time and dedication he gave to the club really shaped where we are today. In light of his sudden passing, we have been inspired to act upon this and we are holding a 24-hour netball match where one match will continuously run for 24 hours, and players will arrive to play at times throughout the event to contribute their time towards the challenge. It would be fantastic to honour his memory in a very constructive way helping to prevent such tragedies in the future. We are in communication with CRY (Cardiac Risk in the Young) and looking to book a screening event in 2022 for our players who are 14 years and over. In order to do this, we need to raise £5,500 which is an ambitious amount. As a club we have become increasingly aware of the importance of heart screening in young athletes. Some of our coaches have watched this BBC documentary, although it may be quite distressing it might be of interest to you and highlight the reason for selecting CRY.

Thank you for any donation big or small,