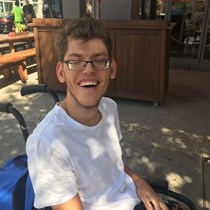 Hi, I'm Will and I have been raising some money for The Lawrence Centre, a charity that provides day opportunities for older people five days a week in Wells, Somerset.

TLC, as it is known locally, is a great place for making things feel better for older people who are isolated and lonely because their world has shrunk. Being out and about is so much more difficult when you are frail and may be suffering from dementia. The chance to go to the TLC for a day a week and see friends, listen to other people's stories, chat over a hot lunch and learn new things means so much, especially if you haven’t got family around you.

This means a lot to me. Despite being unable to walk and partially sighted , both my parents and society looked after me whilst I was growing up. Later on, the tables turned and I helped my mother out looking after my father. He became very unwell after two strokes. When I could, we would watch the sport together and talk about Everton, our football team. One of my last memories was sharing an iPad watching the Somerset County Cricket team play in the semi-final at his hospital bed. Dad was lucky because we were there for him. I would like to think that people who are not as lucky as my father have the same chance to carry on joining in with life.

During 'lockdown', I wheeled a marathon in my manual wheelchair, starting from my garden over 31 days in July. I aimed to raise at least £1000.00 for TLC which it needs to carry on making sure getting old can be fun. I was thrilled that I actually raised over £1500 and I managed to get very fit in my garden.

My target was a tall order, but by popular demand , I have decided to open another page as more people have said they would like to support my effort.

Please give whatever you can to make a difference.