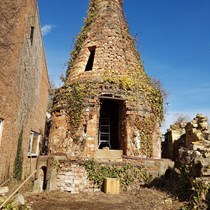 Winchcombe Pottery's 18th century bottle kiln is in need a restoration. The kiln is possibly the oldest of its type in the country and is the most complete surviving example. Used to fire everyday country pottery from the late 1700's as part of Becketts Pottery it produced flowerpots, tiles, rhubarb grocers, bowls of various sizes, pots that local people needed in an age before plastic. Closed in 1914 but reopened in 1926 by a young Michael Cardew as Winchcombe Pottery the site has been producing pots in a similar manner, pots to use in the home. The bottle kiln was last used in 1954 and used coal and wood as fuel over a 2 day firing with hundreds of pots made from the local clay inside which were being subjected to a final heat of around 1080c. Originally the kiln was inside the old workshop building with only the top of the chimney sticking out of the roof. The workshop fell into disrepair and the pottery was moved into another building part of an old stables and cart sheds with the main workshop being built over an old lean to where cattle would bed down. The old building was replaced leaving the kiln intact but outside and more than sixty years later in is in need of some maintenance. We need to raise around 40k to have original brickwork replaced and lime mortar pointing being redone over the whole structure to make it safe. The kiln is also partly covered with ivy which will need careful removal before that can take place. This of course requires scaffolding and a skilled team of sympathetic builders who we have numerous meetings with already to find the best way forward for this project. This kiln represents a crossover between two worlds and the end of one industry being the country Potteries and the beginning of studio pottery as we know it today.

Winchcombe Pottery is one of the longest running craft Potteries in the uk. The original bottle shaped brick built kiln is in need of restoration. It is a nationally important structure in terms of the change in industries from the country potteries and studio pottery today.