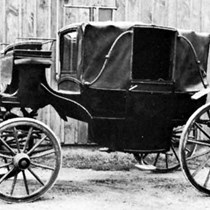 Weʼve raised £0 to Restore Windsors Landau carriage, first licensed in 1890 to work as a Hackney carriage on The Long Walk.

The Landau carriage was built by Marsons of Birmingham in 1860. It was bought new by Sir Daniel Gooch, Bart CE of Clewer Park, Windsor. (He laid the first transatlantic telephone cable in July 1866, using Brunel's 'Great Eastern' for which he received his baronetcy).

His son Sir Daniel Fulthorpe Gooch sold the Landau to Mr Chapman of Windsor in 1910, who used the carriage from 1910 on the Hackney carriage rank located outside Windsor Central Station. (The Victorian Grade II Railway Station was built in 1851 when the Great Western railway arrived in Windsor.)

Mr Chapman sold the Landau to Joby Cooper of Windsor in the 1930's and after the Second World War it was again sold, this time to George Paget (Uncle George to me pictured) of Eton Wick, near Windsor, who once again used it on the Hackney rank outside The Castle.

​The Landau was then passed to my father John Seear in 1986 on the condition that it continued to be used on the Long Walk. Dad first rode in the carriage as a child with Uncle George in 1949, so it has special meaning to me and Windsor.

The Landau continued to work on the taxi rank in Windsor regularly until 2008 when dad decided it should be preserved for special occasions. Since then the carriage returns annually to where it all started - which means the Landau has been operating in Windsor for more than 100 years!

In 2018 the carriage was moved to Greg Rowlands, a historic wheel wright, and now waits for its restoration project to start! It is my life's goal to have this beautiful and historical carriage restored to its original glory. A task not to be under estimated since there are few tradesmen in business now who can work on a carriage such as this. I am not sure when restoration will begin as it is an expensive task but perhaps a grant can be sought? I think this is a wait and see project...but I very much hope it shall happen......

Update in 2020, I began providing free talks on the history of hackney carriages in Windsor and this page was suggested... at the end of the first talk, donations were suggested. £98.52 was raised, which from a small crowd of around 30 people was astonishing! and so the fundraising begins!