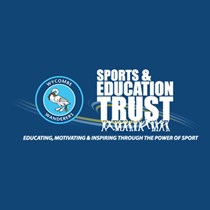 Weʼve raised £130 to help us continue to deliver the best sports, health and education programmes for our community.

Wycombe Wanderers Sports & Education Trust, the official charity of Wycombe Wanderers FC, are pleased to announce that we will have a group of our dedicated employees participating in this year’s Marlow Santa’s Fun Run in order to raising funds for us. Not only that but we’ll also be joined on the day by club mascot Bodger who will lend his support by pounding the course with us!

The 5km fun run, which is organised by the Rotary Clubs of Marlow and takes place on Sunday 5th Dec 2021, is aiming to raise over £60,000 for local charities via the participant entrant fees as well as the sponsorships that each of the runners will try to raise for their chosen charity.

Now in its 17th consecutive year, the organisers have decided to offer both a physical and virtual race option in response to the ongoing pandemic to ensure that the much needed funds can still be generated for local good causes whilst not risking personal health.

The WWSET running team, led by Head of WWSET Paul Foley, will be taking part in the physical run which starts at Higginson Park in Marlow, and follows a looped route around the town to then finish again in the same park.

Like the vast majority of charities, WWSET’s finances were adversely effected by Covid-19 meaning our fundraising efforts moving forward have to be prioritised, especially considering that local need has also grown during the pandemic and there’s now more local people requiring support than there was pre-pandemic.

Considering this, WWSET would like to politely request that if any of you are in a position to donate to our fundraising appeal, no-matter how much or how little, you click on the following link to do so. Rest assured that any amount will be gratefully received!

“Myself and the rest of the team are really looking forward to taking part in this year’s Marlow Santa Fun Run. We are obviously hoping to raise as much money as we possibly can to support the work of the charity so hope that people give generously via our fundraising page, but we’re also looking forward to just getting outside and doing a bit of exercise together.

As a charity, one of our four priority areas of activity is concerned with Sports Participation (the others being Health, Education and Social Inclusion) so we fully recognise the physical and mental benefits that can be achieved via participation in events such as this. We can’t wait for the day and look forward to seeing everybody there either alongside us running or cheering everybody on from the sides.”