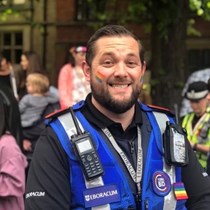 Weʼve raised £86 to raise money for the York Rescue boat by participating in the Micklegate soap box.

York Rescue Boat is an independent search and rescue charity, based in York, North Yorkshire.

​Founded in 2014 after a series of deaths in the city’s rivers, York Rescue Boat has grown from humble beginnings raising money out of the back of a car, to a highly trained and capable team becoming renowned for its work both in York and further afield.

​Their work centres around the Rivers Ouse and Foss in York. Uniquely they work to make the city safer by carrying out combined patrols by boat and on foot at high risk times every weekend throughout the year as apposed to just responding to emergency calls. They also cover other times as requested by North Yorkshire Police or other agencies. This approach brings team members into contact with many people along the river; around 80% of people they deal with during incidents are classed as vulnerable or with Mental Health issues and who are drawn to the river.

​They have a Memorandum of Understanding in place with North Yorkshire Fire and Rescue who are able to call upon York Rescue Boat to assist with rescues, missing person searches and any other incidents where their expertise and equipment can be used.

​As well as the high profile prevention and rescue side of of the charity York Rescue Boat team members help with a program of education, going into schools, scout groups, colleges, universities and other interested groups (including us!) educating on the dangers of open water and how to stay safe around it.

In addition to their work around York, York Rescue provides provides a Nationally Deployable Flood Rescue Team, available to the Fire and Rescue Service National Control Center to be sent anywhere in the country in times of serious large scale flooding. 2015 saw the teams deployed to one of the largest flooding event ever recorded in the UK, the floods following Storm Desmond, which saw York Rescue crews deployed to Cumbria and help perform over 80 rescues in difficult circumstances. Christmas 2015 saw the team working in their home city when York was the subject of major flooding team as part of Surf Life Saving GB's (SLSGB) network of lifesaving clubs.

​They are all volunteers no one receives a wage, and they rely on the generosity of the public to keep the team afloat.

York BID Street Rangers regualrly work alongside York Rescue Boat and they are an invaluble asset to York.