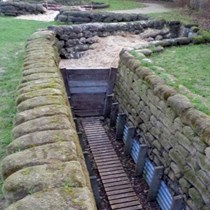 Weʼre raising £100,000 to Save Yorkshire's WW1 Heritage, Our mission is to restore Yorkshire Trench near Ypres.

The Yorkshire Trench is one of the very few WW1 front line trenches, that still exist in their original positions earning its name The Yorkshire Trench as the 49th West Riding of Yorkshire Division manned and improved this section of the trench, the network for communications tunnels which once connected the front-line trenches names after Strensall Road, Leeds Road & Huddersfield Road.

Until recently the trench was accessible to the public. The recent wet weather in Flanders has taken its toll, much as it did in the Great War. It is now seriously damaged by the wind, & rain. We urgently need YOUR HELP to re-instate this important site.

This is part of our Yorkshire heritage, it is on this small piece of Belgian land just outside the town of Ypres. Where so many British soldiers many from Yorkshire fell in battle. It is in remembrance of them and the French, German & Belgian soldiers who died in the vicinity during the period from 1915 to early 1917, that we must repair, and preserve this historic trench. And in that remembrance show both visitor, and student the true reality of war.

​Your donation will be wisely used, and greatly appreciated.

Why £100,000? We can not currently give an estimation of the total costs for a complete restoration. The initial amount is an estimation based on an initial estimation in 2014 of 150,000 EURO (£135,000). Unfortunately, we are aware that the cost is big and that it will be recurrent. Also to note The City of Ieper will also be contributing to this project.

Who will the Money go to? The City of Ieper, represented by the Deputy Major Dimitry Soenen and the Museum Represented by the director Piet Chielens who will also share the budget for this restoration campaign.

100% of Money raised will be used for the Yorkshire Trench Restoration.

I am 60yr Old Civil Servant. Passionate guide in the Realities of War. I create studies for Students to visit WW1/WW2 Battlefields. Placing particular emphasis on the lives & deaths of soldiers from Yorkshire. It is this aspect that I find the most interesting & rewarding.