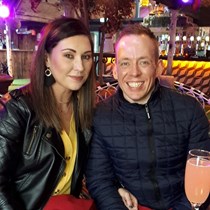 As most of you know our son Ryan was diagnosed with a brain tumour called a Pilocytic Astrocytoma Grade 1 which is a slow growing tumour at the back of his brain on his balance central. After a minor seizure on Fri 1st April at home we took him to Antrim A&E where they discovered the abnormality and we were rushed to the Royal Hospital that next morning for an MRI. They couldn't have worked any faster to operate on Ryan. On that very next Monday Ryan spent 12 hours in theatre where they removed the majority of the tumour. It took him a long time to recover in the hospital and at home, he literally had to learn how to walk and function all over again.. but he has done it and is doing amazing! They now continue to give him MRI scans every 3 months as it may grow back.

The Neurosurgeons were amazing if there was any way we could have been put at ease it was when we got there and had everything explained in detail and we were told they would do their best to save his life. And that is exactly what they did we are beyond grateful. The nurses on the Paul ward really were so friendly and up beat keeping him happy at all times even in between taking his obs which he grew to hate as the days drew on. We stayed on that ward every night with Ryan either in a pull out bed or in one of the parent rooms provided. They also had a team of Occupational Therapists, Teachers and helpers that helped Ryan get on his feet again, brought him toys, books and a DVD player to his bedside. They have a great play room that is filled with toys and stationary to occupy all ages of children! Their parent room always had bread milk, tea & coffee which were our lifesavers.

After speaking with the nurses on the ward about the walk they've told us they wouldn't see the funds raised if it was through the charity and they have a need for pull out beds and DVDS basically the things that make children and parents time there a little easier and more home friendly! We would like to raise for that.