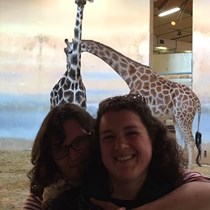 Weʼve raised £480 to Fund our Chernobyl Child through University to achieve her dream of becoming a language teacher and translator!

We started hosting Zhen through the FOCC Charity 12 years ago.

In September 2006 this very timid 7 year old was handed over to myself and my 4 children to spend a month in our home.

Zhenya spoke no English and we spoke no Russian.

At that point she lived in a 2 bedroom flat with her Dad, Granny, Uncle, Aunt and her 2 cousins.Unfortunately her mum was and still is an alcoholic. It was very hard to imagine that the total amount of income coming into the house with two full-time and one part-time worker was $235 per month. They could not afford the good food that was imported into supermarkets.

The food they bought was local produce which had been grown in soil that was still polluted from the time of the Chernobyl disaster in 1986.

For 5 years we brought her over with the charity and sent her home with a suitcase of clothes for the next year and treats for her family. After that we have paid for Zhen to come over privately at our own cost. We were told that for every year she came over for a month it would increase her life expectancy by two years. That's an extra 24 so far and we have no doubt she will fill it to the max!

A recent discussion with Zhen was that she was a little scared as she did not actually know anyone who was over the age of 65 years old. It's quite a scary prospect to think that by the time she is 30 years old she may not have her dad or her uncle and aunt her granny died a few years ago at the age of 63. To us, Zhenya is a very important part of our lives and I would say she is my Belarusian daughter and my kids think of her as a sister. She is very much a part of our family and has a loving Father at home! Zhen has worked exceptionally hard at school with an English tutor, paid by us, to help her on her way to becoming a teacher and translator. On her visit last year we had the pleasure of being with her when she was accepted into University, she was thrilled and we were so proud of her and her hard work..

We promised that for the next 5 years we would make sure that her fees were paid and that she would graduate. We paid for her fee's last year but we are hoping to raise enough money at our fun quiz to pay for next years so that we can continue to bring her to Scotland for a visit and help her with some English tuition. The university is 5 hours from home so her Papa pays for her accommodation which involves a great deal of saving and sacrifice for him but is testament to how much he wants his daughter to succeed and have a better life than he has.

I hope the above has given you a little insight into our girl.