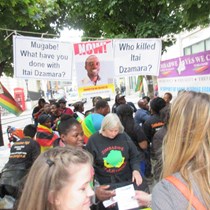 Weʼve raised £120 to to train civilian peacekeepers in Zimbabwe to help people in local communities overcome fear & intimidation during & after 2018 elections.

On Saturday 1st July 2017, activists from the Zimbabwe Vigil & our sister organisation the Restoration of Human Rights in Zimbabwe International (ROHR) will walk 15 miles from Ilford (start: 8.30 am) to the Vigil (arrive: 2 pm) to raise funds for the Zimbabwe Peace Actors' Platform (ZimPAP) project ROHR is facilitating in Zimbabwe. ZimPAP aims to train 100,000 civilian peacekeepers to educate people in their local communities on their constitutional rights & to help overcome fear & intimidation leading up to & after the 2018 elections. The peacekeepers will also monitor incidents of violence & intimidation.

ROHR & 18 other civil organisations involved in peace-building in Zimbabwe, including Heal Zimbabwe & the Catholic Commission for Justice & Peace, with support from Amnesty International signed a Memorandum of Understanding in December 2016 to collaborate in preventing violence & work together in peace-building under the ZimPAP initiative.

Like previous elections in Zimbabwe, this election has already been rigged by Mugabe's Zanu PF ruling party & will be characterised by violence, abductions, torture, political assassinations & persecution of opponents of the government. Perpetrators of violence go unchallenged & the rule of law is non-existent under a partisan security sector. Patronage is used to manipulate voting for Mugabe & his Zanu PF party. Zimbabwe today suffers from a political, economic & social crisis which can only be resolved through a free & fair election under international supervision. Mugabe is standing again as President although he is 93 years old.

ROHR believes democratic choices should never be about coercion, dictatorship or manipulation of citizens. Rather, it should be about people’s issues & aspirations within an environment of fair play, transparency & accountability underpinned by the rule of law, justice & peace. We appeal for support to help us relieve the suffering of the people of Zimbabwe. We believe Zimbabwe deserves better!

The Zimbabwe Vigil started in October 2002 & is held every Saturday from 2 - 6 pm outside the Zimbabwe Embassy London to protest against human rights abuses and lack of democracy in Zimbabwe. The Vigil will continue until free and fair elections are held. www.zimvigil.co.uk.