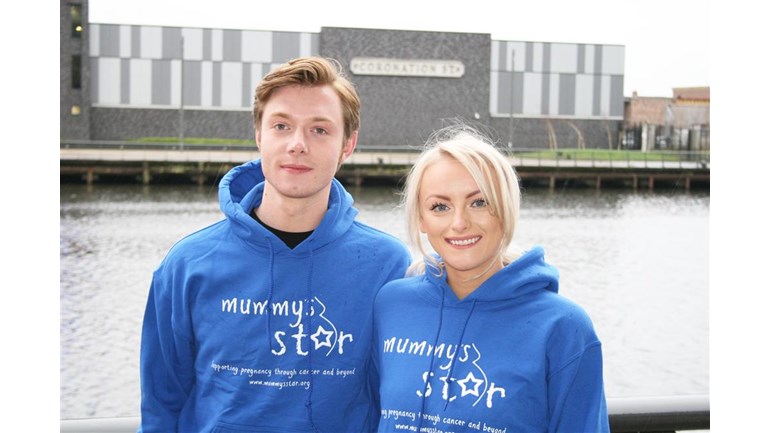 Show your Stars at one of the biggest running events of the year! Here at Mummy's Star we have team members running both 10k and Half Marathon distances at the Great Manchester Run 2019.

On the 19th May Rob Mallard and Katie McGlynn, who play Daniel Osbourne and Sinead Tinker in Coronation Street, will be challenging themselves to run the Great Manchester Run 10k!!

The on-screen couple became patrons of the charity earlier this year following their heart-breaking storyline in which Katie’s character Sinead was diagnosed with cancer during her pregnancy.

Katie said "So last year, after doing the Manchester 10k I said and I quote 'I’m not going to do this again guys, it’s too flippin hot', cut to becoming a patron of Mummy's Star with my onscreen hub. We have decided to take part to raise funds and awareness to this amazing charity!

I can’t stress enough the importance of the work these guys do. Helping families who have been affected by cancer during
pregnancy. The smallest actions go a long way. We need YOU to help aid these families who are seriously struggling in tragic circumstances.

This is something I am truly passionate about after working with these guys during my story-line at Coronation Street."

Mummy’s Star is the only charity in the UK and Ireland dedicated to supporting women and their families affected by cancer during pregnancy, and last year worked closely with Coronation Street’s production and research team on the development of the sensitive storyline.

Thank you so much for your support!

Show your Stars at one of the biggest running events of the year! Here at Mummy's Star we have team members running both 10k and Half Marathon distances at the Great Manchester Run 2019.

In June 2013, Mummy's Star was born. It is the only UK charity with the aim of 'supporting pregnancy through cancer and beyond'. We support those diagnosed with cancer in pregnancy and within a year of a birth. For more information visit our website: http://www.mummysstar.org

Charity Registration No. 1152808
Find out more about charity fundraising