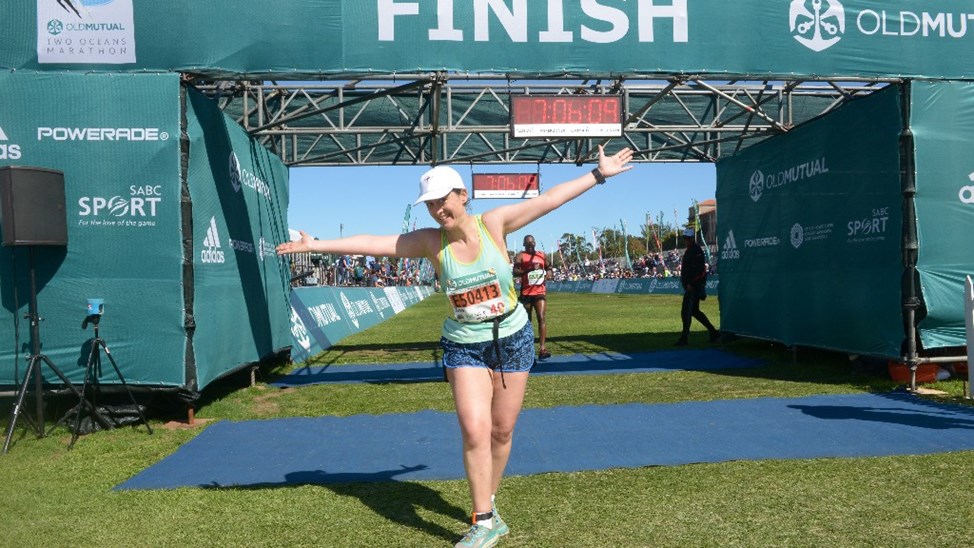 Our ally, Ana Gonzalez of Wilson Solicitors is running the New York Marathon to raise funds to help change the lives of homeless LGBTI asylum seekers and refugees in the UK.
Closed on 11/30/2018
Charity Registration No: 1169868
About the charity

When I hit middle age I promised myself that I would not be a cliché. And then I started flirting with long distance running, so I officially failed miserably. Four years, 8 marathons and 4 ultra-marathons later, running has become a big part of my life. This photo was taken when I finished the Two Oceans ultra marathon (56km, 36 miles) in Cape Town in 2017.

Running has giving me so much. It has made me stronger, both physically and mentally. It has empowered me to attempt things I never thought possible such as completing the infamous Comrades Marathon in South Africa (90km, 55 miles) earlier this year as well as London to Brighton (100k, 60 miles) in 2017. I may not be fast but I am capable of covering very long distances, just like the humble wild dog in Africa. Fittingly, this is the running nickname my lovely South African husband has given to me.

Running also allows me to connect with people in very unusual ways both at races and via fundraising. Some of the most emotional and profound experiences I have had in my life have taken place in ultra-marathons. I have been humbled by the kindness received from complete strangers in very long races. There is no match for the camaraderie shown by fellow runners at the last stages of a tough race. Arguably we are all rather delirious by then but it seems to bring out the best in people!

I feel very privileged to have the opportunity to run the New York Marathon this year. It is also an honour and a privilege to fundraise for Micro Rainbow International again. This is an organisation very close to my heart and they have assisted several of my clients. I have seen first hand the difference MRI has made to the lives of very vulnerable LGBTI asylum seekers either by providing safe housing, by fostering a sense of community through the many other activities they organise, such as the choir and by generally empowering asylum-seekers and refugees to move on with their lives and integrate in the UK.

I would like to reassure all potential supporters that Micro Rainbow has not paid my entry fee or my travel and accommodation expenses. I am completely self-funded. All these expenses have come from my own pocket. Rest assured that every penny you donate will go straight to the organisation.

So please sponsor me in my quest to run through the Five Boroughs (Brooklyn, The Bronx, Queens, Staten Island and Manhattan) on 4 November. I shall wear the Rainbow Butterfly with pride!

Micro Rainbow International Foundation promotes socio-economic inclusion of LGBTI people worldwide. In the UK, it supports LGBTI asylum seekers and refugees . Every year, over 1100 LGBTI persons claim asylum in the UK because of their sexuality, gender identity or intersex status. LGBTI asylum seekers are often not safe if they are placed in housing environments with people from their own home countries, or those people whose religious and cultural backgrounds hold extreme homophobic and transphobic views. Non-cisgender lesbians and gays, trans and intersex people often suffer from higher levels of violence and abuse. LGBTI asylum seekers have in the past reported being bullied and assaulted by other refugees with whom they share accommodation.

Against this background, MRI wants to ensure the safety of LGBTI refugees, their economic empowerment and their social integration. MRIs solution is to

(1) offer housing for LGBTI asylum seekers and refugees exclusively, to provide them with safe temporary accommodation;

(3) provide assistance to find employment and to set up small businesses.

The service provision combination of safe housing and socio-economic services that foster integration into British society (a holistic approach to integration) gives LGBTI refugees and asylum seekers greater chances to fulfil their full potential in life.

You are incredible. WELL DONE!