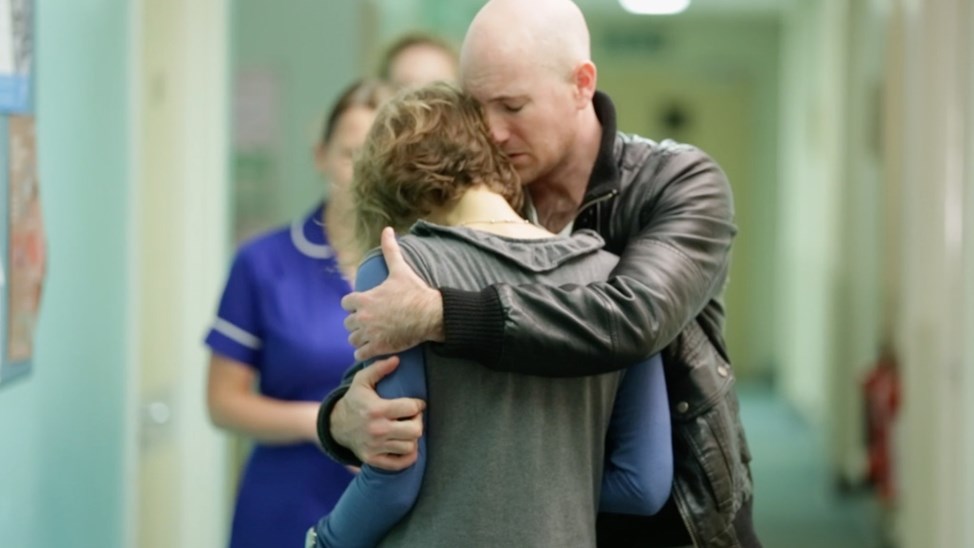 To produce an educational film to improve primary care support for parents in the longer term following stillbirth, particularly in the areas of follow-up support for intense grief, significant couple relationship issues, anxiety, depression and PTSD
Charity Registration No: 1149005

In December 2013 charity, Abigails Footsteps, commissioned White Boat TV to produce a raw and arresting drama-based film on the plight of a couple who experience the stillbirth of their baby. The 20-minute film is based on real life experiences with the aim of improving bereavement care for parents and to raise awareness of the 17 babies who suffer stillbirth or neonatal death every day in the UK.

The film has been highly successful and is currently being used by Child Bereavement UK and SANDS (Stillbirth and Neo-Natal Death charity) as part of their intensive training programme for midwives and care staff throughout the UK. The two charities also worked with the Royal College of Midwives (RCM) to produce an e-learning training course using the film as a central tool - for the RCMs 27,000 members on the subject of bereavement, something many midwives and care staff never receive during their formal training.

The film has received well over 321,000 views across 179 countries on You Tube (to date). It won two Gold IVCA Awards (Best Charity and not for Profit and Best Drama) and selected by the BFI for permanent preservation in its archive.

The entire drama takes place in a hospital where the parents receive the devastating news that their baby has died and the mother needs to give birth. One viewer commented: Essentially, the video is probably the closest thing Ive seen or read to what stillbirth is like. If youve been through it, or are going through it, Ill tell you something Ive learned: finding people who can support you who have been there, is so important for your own healing process.

You can view the whole film by visiting this link

Here is a trailer for the film;

We believe that there is a strong need to produce a second film, as a compliment to the first, to improve primary care support for parents in the longer term following stillbirth, particularly in the areas of follow-up support for intense grief, significant couple relationship issues, anxiety, depression and post traumatic stress that may extend into a subsequent healthy pregnancy.

With one in every 200 babies being stillborn (around 15 stillborn and neonatal deaths per day in the UK), Britains figures are among the worst in the developed world.

This film will be based on a storyline around what happens when bereaved parents return home from hospital and are struggling to deal with the loss of their child. There is a lot of evidence to suggest that the experience and feelings of parents is akin to post traumatic stress disorder (PTSD) and this experience is often exacerbated by a lack of understanding and compassion from primary care staff.

Returning home is an incredibly difficult time when the mother is physically ready to nurse and nurture her baby. She may be on maternity leave from work; dealing with friends and relatives who are themselves finding it difficult to know what to do for the best. Research shows that understanding, care and the right support shown at these key points in the bereavement process can positively affect a mothers mental health going forward. Conversely, lack of communication and support at this stage can lead to long term mental health issues for parents.

What is the Project?

To create a raw and emotionally arresting drama on the plight of couples following the stillbirth of their baby. The film would once again be based on real life experiences and would involve interviewing parents about their stories to create the script. There are a number of issues that could be covered in this film. They include

Support for the mothers physical health

The mothers mental state of mind. PTSD and depression

Poor communication between the hospital and the midwives in the community, so either visiting to see a baby that is not there, or not visiting at all as there is no baby.

Poor communication between hospitals and GP so GP may be unaware of loss of baby.

Friends and family not knowing what to say

People crossing the road rather than speaking to Mum/Dad

Relationship issues between the parents

to give health visitors, midwives and other primary care staff the confidence to talk to parents about the loss of a child

Message from David and Jo Ward, founders of Abigails Footsteps:

We are immensely proud of The Deafening Silence. White Boat TV, under the leadership of Nick Gardner, produced The Deafening Silence, which was written and directed by Chris Godwin, and in doing so have created a beautiful legacy for our daughter which has helped train midwives around the world, as well as help families have a better understanding about stillbirth. There is without doubt the need for a second film and there is only one team we would consider making it.

If you have seen The Deafening Silence you will get it. If you haven't seen the film you need to watch it. Either way please help support us create this second, much needed film.

A small amount towards a very much needed second film x

To relieve the suffering of parents and their families who suffer bereavement through the death of a baby before or at birth, and to advance the knowledge and expertise of healthcare professionals and others in supporting and dealing with the effects of such a death on the bereaved.