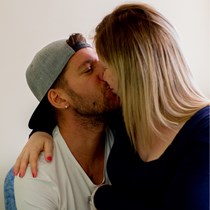 Me and my daughters will be taking part in HBF's 12km run this year. Molly 2 and Una 6 months by the time of event.

natural health was brought to our attention soon after Liam's initial diagnosis. Day by day we included more and more into our daily lives. With being diagnosed with GBM and given a time frame of a year no more than 3 we tried everything we could. I personally researched the majority of everything Liam did to try and turn the disease around, not without the help of so many others.
Everyone was behind us, everyone willed it. Unfortunately it wasn't to be.
Liam passed away on the 19th March at Bethesda Hospital, Claremont, Western Australia.
Bethesda's staff were mostly amazing and faultless. The hospital is in a great location, if unlike Liam you could see and walk unaided. It did however fail massively to hold any of my expectations or to come close to the experiences I've have had in hospices'.
In Liam's memory and ode to his legacy my future lays in a dream. A dream to open and run a publicly funded wellness centre and hospice, to uphold our belief in natural health and help raise awareness for prevention of illness as well as provide a hospice, not a hospital but somewhere the ill and their families can be comforted, feel valued, included, be at peace where they are and feel cared for without a price tag. Above all else I want it to be a place where people come to live out their lives not where they come to die.
This is my dream, my promise to Liam. He told me I could make a big difference in a lot of people's lives that I could help them.

I want to kick start this for Western Australia I want to bring an already close community closer, to look out for each other and to look out for ourselves without it being seen as selfish.

This is not just a campaign for the ill.
But for the future generations who want to live simpler, without fear and who can get help where ever they look for it and how they need it.