There was not much happening down the fields in Stoke Aldermoor, during the filming of the Italian job. There was no publicity about the film crews or the minis being at the site. The Sowe valley sewer scheme was well in progress, It was to the general public a construction site they were well used to the coming and going of vehicles at the site.

Remember there was no Allard Way in the days of 1968 it was a open field except the Coventry and London railway line, the site was overlooked by the flats along the Barley Lea, the minis were kept under wraps hidden in the sewer pipes for four days filming.

The Italian Job was just in its infancy. Neville Goode of 30 years and another was given the job

“Take two cranes to the Linfield to help lowering and retrieving”. 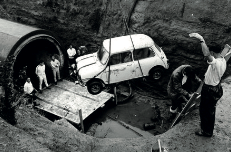 They were told. Who could imagine at the time the massive success and interest the film would create and the part Coventry would play in it.

When they arrived with there cranes the actors and stunt team where having there mid morning breakfast on the top of a double decker bus that had been converted into a canteen. “Let's get to work “ was shouted, as both crane operators where shown to the set up positions. Nevells crane was positioned above a hole approximately 14 foot deep into a tunnel 10 foot diameter. After strapping a sling around the axils of a mini he was able to get the mini suspended and hovering over the tunnel opening.

Coventry Mini Club spear headed by Kevin Conway wanted to find the exact spot where the minis where lowered into the ground for the film The Italian Job. While on his quest he met the actual crane driver who lowered the Minis into the ground.

With photos and testimony, he found the spot and planed to mark it with a plaque on 18/10/2019. Interviewing the Crane Driver Neville Goode he found out he had lent a pair of gloves to the stunt man Remy Julienne to help with the vibrating car going through the tunnel.

He thought get Remy to sign a pair of gloves, post them, and we present the gloves at the unveiling of the plaque. To a great surprise Remy said no, but I would like to do it in person. After 50 years he returned to the place where the only stunt in the UK was made, to a place where it can be said one of the greatest car chase scenes was made to thank a man that lent him a pair of gloves.

We are embarking on this new, exciting journey .

On the lower field at Stoke Aldermoor, Coventry, along the original route of the Italian Job, we are going to lay surface laid tunnels 50 metres long so Minis (classic and modern) can retrace the route Charlie Croker and his team took while making there escape with a boot full of gold.

We are able to do this due to Coventry being given the status City of Culture.

We offer you the chance to be part of something truly great. There will be very limited places, so it will be very important to register early.

go along the footpath, over the bridge, under the subway past the plaque, onto the field, through the tunnel (circled in yellow), then onto the main road and return to start.

What Would I Gain From Sponsorship?

Media coverage from businesses already showing an interest in joining the unique event in Coventry. Advertising on the Coventry Italian Job website. This unique event will be an annually organised event that will generate interest from thousands of enthusiasts, and from the millions of motoring groups around the world.

Companies already showing an interest are:

How Can I Contribute?

Contributions would be a payment in the form of sponsorship, which in return a package will be put in place for you to benefit.

The Italian Job of 1969 helped make the Mini an icon after the now famous car chase through Italian streets, Which ended in us watching a line of minis racing through a semi flooded sewer. That was actually filmed in Stoke Aldermoor, Coventry & we're doing it again.