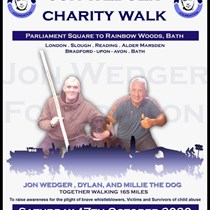 Weʼve raised £7,340 to Raise awareness to protect whistleblowers in the police and promote justice for abuse victims

I am a retired Police Detective with over 25 years service in the investigation into child abuse. I was threatened and bullied out of my job for exposing the high-level cover-up of child prostitution. For the past eight years, I have been working with anti-child abuse campaigner Bill Maloney in raising awareness of the true extent of the scale of this heinous crime. I, now with other whistleblowing cops as well as victims and survivors of abuse, am campaigning for a change in the Law to give brave whistleblowers the protection they truly deserve. In the words of Edmund Burke: "All that is necessary for evil to triumph is for good men to do nothing."

I am now raising funds for an awareness-raising campaign by walking from London to Manchester via the UK's canal network with my dog, Millie. Both cities have suffered from the above crimes, and the respective Police whistleblowers have likewise suffered at the hands of their senior high ranked superiors who attempted relentlessly to silence them.

I have the backing of other brave whistleblowers who will be joining us on various stages of the walk. Support has also come from morally focused MPs who have faced resistance from their peers for supporting us, as well as victim and survivor support groups and members of the public. Well-wishers have included the Mayor of Manchester, Andy Burnham; Cardinal Vincent Nichols; and the original and most famous police whistleblower, Frank SERPICO.

Your donations will go to supporting the walk and the logistics and organisational team. Any surplus raised will go to The Ley Community, a drug/alcohol rehabilitation centre based in Oxfordshire.

Since I stood up and exposed the vile crimes against children (which were suppressed for decades), I faced a sustained and aggressive onslaught designed not just to silence me but to ultimately destroy me. This attack strengthened my resolve, and I embarked on a journey where I have met brave, kind, compassionate individuals comprised of fellow whistleblowers, victims, and survivors of abuse. If whistleblowers do not receive adequate, independent, and secure protection then the horrific abuse of society's most vulnerable and precious members will continue.

I graciously and respectfully ask that you back my campaign. Thank you, and God bless.

Links to my recent press interviews and articles:

I am a retired Police Detective with over 25 years service in the investigation into child abuse. I was threatened and bullied out of my job for exposing the high-level cover-up of child prostitution.