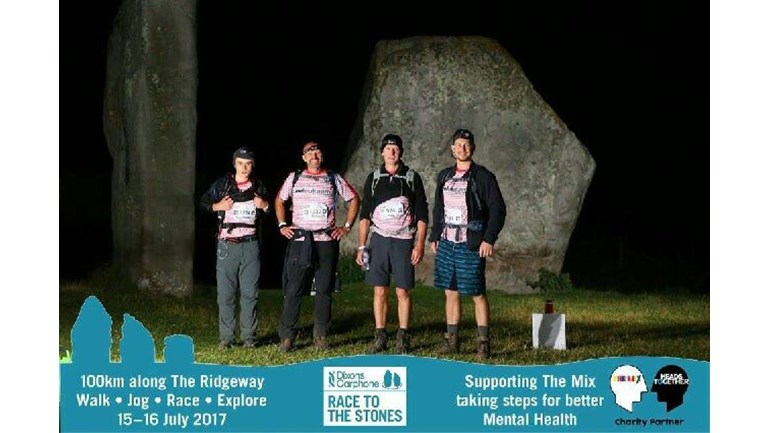 Walking 100km through the night

We walked 100km in less than 20 hours for Cure Leukaemia because we wanted to raise money towards the £1m appeal!

Cure Leukaemia has committed to raise an ADDITIONAL £1m to fully fund the expansion of the globally significant Centre for Clinical Haematology in Birmingham by 31.12.2017 and YOU can play your part.

This was a proper challenge - walk 100km in under 24 hours - for Cure Leukaemia.  All the training in the gym, the long practice walks up to 40 miles, and stretching do not quite prepare you for what is a massive test of mind and body (especially feet, hips and hamstrings!!)

The day itself was cloudy with rain in the air as we set off at 8.30am amongst thousands of other runners and walkers.  What had seemed like a good idea when Cure Leukaemia CEO, James McLaughlin, first approached us at the turn of the year "to do some long distance walking - it's just your thing", seemed less of a good idea 20km in and just over 3 hours gone - hamstrings were tight, and little niggles were starting.  We used the check points well for a quick 15 minutes each time for refuelling, more stretching and the joys of a fresh pair of socks (which sounds odd but until you've been there…) and hit half way in just under 9 hours.

It was great to be met by Joe White of CL and our other team member and lead back up crew, Tracy, for a proper meal and a pint (in Josh and Clive's case - never has beer tasted so sweet).  By this time we knew we were well ahead of our 22 hour schedule but as we set off as one of the few (or should that be "stupid"?) who were doing the non-stop challenge, things started to get very real.

You're on the way home with each step but with accumulated tiredness and blisters (compeed and ibuprofen notwithstanding), sore hips, and other ailments starting to take their toll.  The walk became eerily quieter and the check points fewer in the second half which meant you become aware of what's still to do - we hit 75km in the pitch black at 10.30 - 14 hours in and only a slight slowing as you literally can only see a handful of feet in front of you.

That did have one advantage, though, as we could not actually see the two and a half mile climb up to the final check point on 88km.

We set off about 1.15am for the final push which by now really was about survival .  We did what we'd done all day as a team - estimate our time, work out when the 90/95km markers should come up and kept putting one (painful) foot in front of the other.

And yes it does hurt as the warning we had in the joining instructions reminded us. But we also knew we were doing something that will make a difference to lots of others, who won't be able to walk 100km in 24 hours, even if they wanted to. The final test to show we had "done it" was having to head out to Avebury stone circle to have our official photo taken and then retrace our steps for 1.5km to reach the finish at 3.35am where we were greeted by cheering crowds (ok about 30 people) and well-wishers and some very welcome hot food…and a celebratory pint!!

You know a charity event is going to be a challenge when the joining instructions include the warning "this will hurt" and recommend paracetamol (other well-known pain killers are available).

Undeterred as four intrepid/slightly mad friends, Clive Read, Josh Hartle, Martin Yardley and Tom Yardley, we will be doing our best to raise much needed funds for Cure Leukaemia's £1m appeal to fully fund its £3.2m expansion of the internationally renowned Centre for Clinical Haematology in Birmingham by 31 December 2017. This will be a genuine game changer in the battle to fight this disease - it will provide much needed space and funds to provide for additional care and support to those who need it most.

On Saturday 15 July we are walking 100km in under 24 hours for Cure Leukaemia and we need your help to raise as much money as possible. It will be a massive challenge.

We will be walking through the night. There will be no stopping and putting our feet up or having a cheeky pint along the way. We will be seeking to raise money every single step but it will be worth it. And it is a small thing to do to make a difference to so many other people who need our help.

We are even more determined to take on this gruelling challenge after meeting 49-year-old leukaemia patient Deborah Harkins, who you will see in our picture. Deborah had Acute Myeloid Leukaemia and is being treated by the team of doctors and nurses funded by Cure Leukaemia, at the Queen Elizabeth Hospital, Birmingham.

You can help us help others by donating on our Justgiving page and if anyone sponsors us more than £20, they will get their name on our walking t-shirt and we are also looking for businesses to sponsor us too. Please contact Clive at CRead@VWV.CO.UK for more details.

Cure Leukaemia has committed to raise an ADDITIONAL £1m to fully fund the expansion of the globally significant Centre for Clinical Haematology in Birmingham by 31.12.2017 and YOU can play your part.

Charity Registration No. 1100154
Find out more about charity fundraising