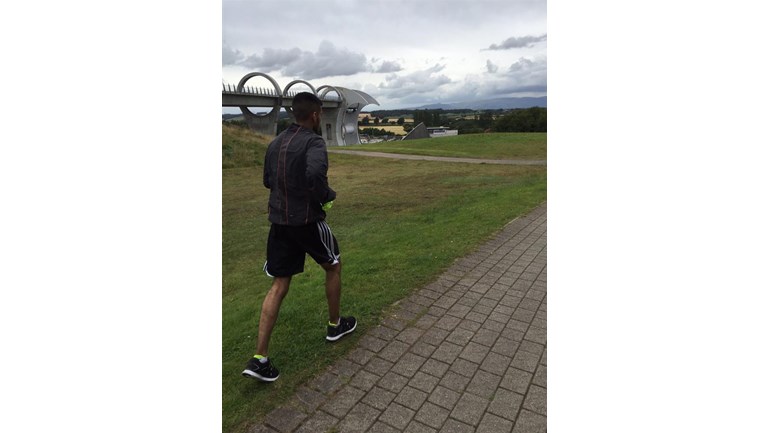 I am running 104 miles within 24 Hours. for World Care Foundation because Raising Money for Orphans and Poor Children

As some of you who know me will already know I undertook this challenge 4 years ago in August 2015. So to update everyone who does not know here is a brief look back at the challenge.

The challenge was 104 miles in 48 hours. The simple idea behind it was simply to challenge myself. Thinking it can't be that hard! Can it?

The plan was to run from Edinburgh to Glasgow. Stay the night at my cousins and run back the next morning. Little did i know what i had got myself in for! With only 8 miles dedicated training for the run, I was ill prepared and had no sense of nutrition or even the right footwear for the task at hand. Literally! I borrowed my little brothers running shoes the morning of the run..

Leaving with the world class preparation... and a will to get to the other side, I encountered obstacles I had never faced mentally and physically. losing a toenail along the way, muscles seizing up till there was no give in either of my legs even sobbing like a little baby as i was running the last couple of miles before arriving to Glasgow. I was broken. After having a rest that night and waking up in the morning to do it again I soon realised I wasn't going anywhere. I couldn't move my legs to get out of bed, or even walk to the bathroom without assistance. Never mind running back to Edinburgh. For the first and only time in my life i actually thought i had injured myself, i'm not recovering from this.

Fast forward 4 years and several challenges later mostly on bicycles, this is the one where i'm back on my feet. 104 miles in 24 hours. It's the same idea as the previous run but instead of an overnight stop, I will turn around at the Glasgow checkpoint and run right back. The goal is to do it within the 24 hours but hopefully will have it done much quicker than that. This time it will be completed no matter the circumstances!

First and Foremost this is a personal challenge. Secondly having the chance to raise money becomes a part of this type of activity, a true blessing to be able to help Orphans and Poor Children who have been struck with tragedy in their lives in ways we could not even fathom. In parts of the world where the hope for a better future is not likely without the efforts of humanity coming together.

Having seen the amazing work Edinburgh based World Care Foundation do on a daily basis and there support for all these different challenges, it's an honour to work with them again and help raise funds so they can carry out the amazing work that they do. Being one of only a handful of charities that operate a 100% donation policy making sure every pound donated goes towards the cause.

Team lets get behind this Challenge.

Share this like crazy with your friends, work colleagues, family, cousins, Whatsapp groups, social media and any other ways you can think off and get this spread far and wide!! Let's Smash the target maybe even add a '0' to it

FOR ORPHANS AND POOR CHILDREN

We are a volunteer-led registered charity. Set up in 2015 in response to the Syrian war crisis but we aim to assist wherever there is need. we have delivered aid throughout Europe, Turkey, Lebanon & Syria. With 2 widow and orphans centres. volunteers pay their travel costs. 100% donations policy!

Charity Registration No. SC046662
Find out more about charity fundraising