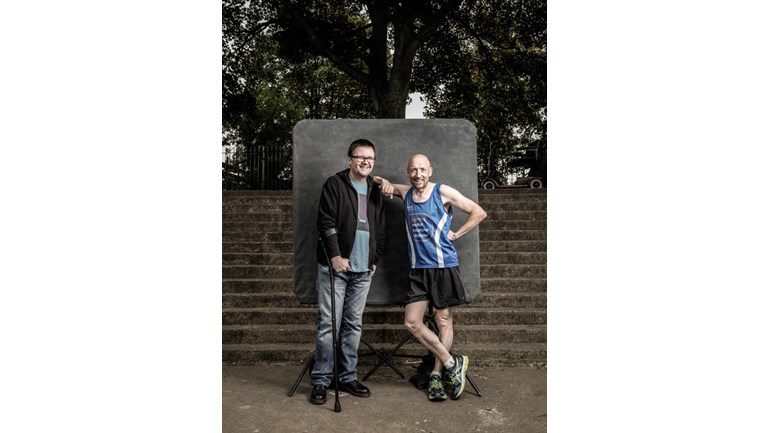 A 26 mile run and 26 "Miles" of MND stories for Motor Neurone Disease Association because motor neurone disease needs treatments and a cure!

Three of Miles's best mates (including Cristian) will be running in the Hull Marathon on Sunday September 22. They've been training very, very hard. It's part of the culmination of the 26miles4MND book project and all to raise cash and awareness for the Motor Neurone Disease Association.

Please share our link and donate if you can to help us beat our target. Thank you!

26 Miles 4 MND is a combination of a marathon run and the creation of a photographic book to raise funds and awareness for the only National charity in England and Wales supporting people with motor neurone disease.

In 2013 editorial photographer Cristian Barnett heard that his close friend Miles Pilling had been diagnosed with a form of motor neurone disease (or MND).

Not knowing anything about MND Cristian was shocked to discover most people die within 3 years of diagnosis. His friend Miles was one of the "lucky" few who have a slowly developing form of motor neurone disease. Even so, he faces the possibility of gradually becoming paralysed,  losing his voice and being locked in a failing body with a fully functioning mind.

Miles had spent nearly all his working life as a television news cameraman, director and journalist but in April 2014 was forced to give up his career because of disability caused by MND.

Soon afterwards Cristian decided to start a photographic project to raise much needed awareness of motor neurone disease - He would photograph 26 people who's lives have been affected in diverse ways by MND. To make it memorable he decided Miles should be in each of the portraits alongside the main subject. He'd also, in one way or another complete a marathon - Hence the name 26 "Miles" 4 MND!

Thinking it would take under a year, five years later Cristian and Miles have travelled the length and breadth of England and into Scotland, taking portraits of more than 26 people. The photographs range from people living with the condition to researchers working towards treatments, nurses, volunteers, carers and even a puppeteer working on a show about a man with MND. You'll also find two or three household names amongst the photos including pop superstar Kim Wilde.

Miles has interviewed and written the background story of each person they've met.

The resulting stories and photographs are being published in a book to coincide with the 40th anniversary of the Motor Neurone Disease Association in October this year.

There is now a team of volunteers working on 26 Miles 4 MND, four of whom have entered the 2019 Hull marathon in September as a relay team. Please show your support by making a donation.

Every person has a 1 in 300 lifetime risk of developing MND. It still has no effective treatment and no cure. It devastates lives.

By donating through Just Giving the money goes straight to the MND Association where it is used to support people with the disease, their carers and families and also to fund much needed research into treatments and a cure.

We truly appreciate any donations however large or small. Thank you!

All the portraits and edited interviews can be seen on the 26 Miles 4 MND Instagram feed (www.instagram.com/26miles4mnd/).

You can also scroll through our blog (26miles4mnd.co.uk) to see how the project has developed and grown.

The book will be available in October 2019.