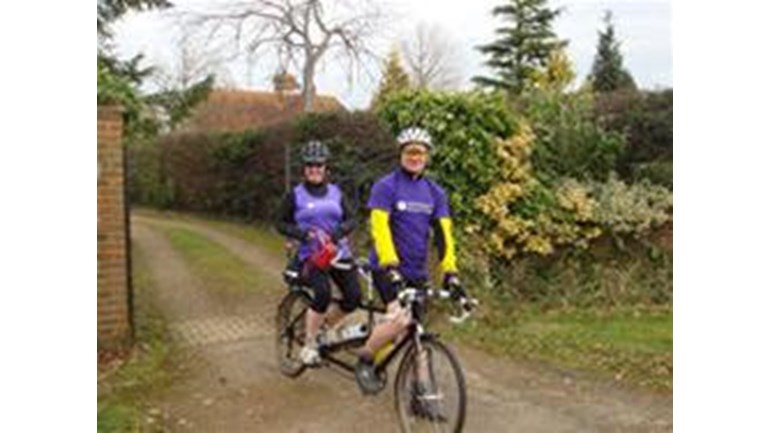 Thank you very much to everyone who has donated to our fund-raising page in 2009.
If you have found this page after 2009, please visit Susie's blog at Extreme Knitting Redhead to see what challenges she has planned (2010 is going to be another busy year!).
Thank you for your continued support.
Our names are Paul and Susie and this year we joined together to raise funds for the Alzheimer's Research Trust.   Paul is a serious biker and Susie is a marathon runner but this time there's a twist - we have been riding a tandem and Susie has been knitting whilst riding - yes, you did read that correctly!!!  Our main event was the Isle of Wight Randonnee on 3rd May, a 100k ride around the island and Susie managed to knit at least part of the way round whilst riding the tandem (even though Paul forgot to mention that the route is very hilly!!!). We also visited Brighton on 13th June for World Wide Knit in Public day where we did a demonstration ride and held a collection for the Alzheimer's Research Trust.  In July, Paul took part in a long distance event travelling from London to Edinburgh then back to London, which is around 875 miles and took him 117hours 30minutes to complete - what a star.  Susie was quite relieved not to be included in that mad escapade!

Susie is now training for the Abingdon Marathon on 18th October where she hopes to beat her road marathon pb (personal best) time of 4:50 which was set at the London marathon in 2006.  Check out her blog at Extreme Knitting Redhead to see how her training is going.
This will be her 17th marathon in 4 years and her mum's story still inspires her to keep on pounding out the miles:
Peggie's story, in Susie's own words:
"In 1997 my mother, then aged 81, had a series of minor strokes.  Shortly after that we started to notice behavioural changes notably memory loss and confusion over everyday items.  We thought it was just old age finally catching up with her.  Then she started wandering and had violent mood swings.  Although she already lived with us it became obvious that she couldn't be left alone for long and so I left my job to care for her.

The next few years saw a gradual decline into the blackness that is 'vascular dementia'.  My normally placid mum became violent and aggressive.  She had psychotic incidents where she would see imaginary people (children hiding in her wardrobe, Russians sitting on the stairs, women stealing her clothes) and she would shout at them and sometimes throw things too.  She was so convincing that we used to go and check that there wasn't anyone there!  When my sister died several years ago mum did not know who Judy was or that she was her daughter.  The moment that I finally realised she no longer knew that I was her daughter was a terrible time for me.

In the last 2 years that she lived with us, life for us all became almost unbearable as she needed 24 hour care - she couldn't be left alone at all because she would either wander off or hurt herself, she never slept for more than 30 minutes at a time during the night, she became incontinent and incapable of doing anything for herself.  Finally my husband and I realised that we could no longer provide her with the care that she needed and she went to live in Castlemaine where Harry and his team did a splendid job caring for her in the final months of her life.

There she lived a zombified existence unaware of who she was, what she was or where she was.  It was heartbreaking.  She died in 2005, the day after her 89th birthday. I ran my first marathon in her memory 2 weeks later.

Donating through Justgiving is quick, easy and totally secure. It's also the most efficient way to sponsor me: Alzheimer's Research Trust gets your money faster and, if you're a UK taxpayer, Justgiving makes sure 25% in Gift Aid, plus a 3% supplement, are added to your donation.

So please sponsor us now!