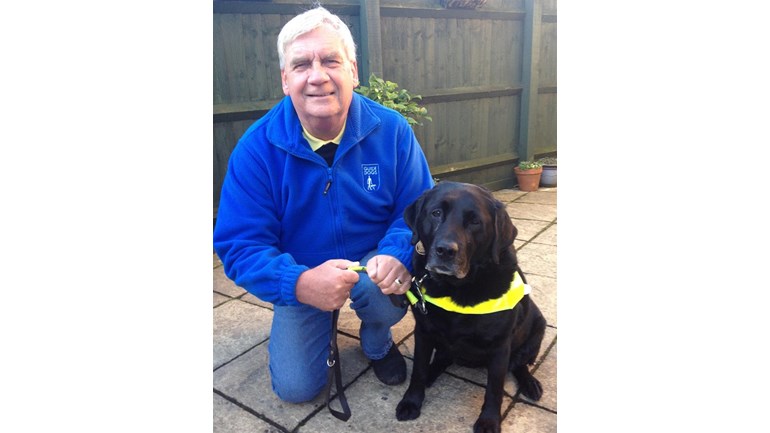 I was registered blind in March 2005 and decide to apply for a guide dog in July of the same year.

I got my first guide dog named Joy in May 2006 and in the ten months that I was awaiting her I was one of 180,000 visually impaired people in the United kingdom that couldn’t get out of the house alone. I did try it but finished up in the middle of the road and constantly bumping into lampposts.  I completely lost my confidence and independence and my wife Shirley had to take me everywhere.

After doing my month long training from home and when I was told that Joy and I had qualified and could go out on our own, I thought "could I put my trust in a dog to keep me safe!"

I quickly realised that I could put my trust in Joy and she kept me safe wherever I went on the routes  we were trained on and we developed a great bond between us.

I realised everything that Guide Dogs had said was coming true. She gave me mobility, freedom, confidence and independence and she also gave independence to my wife too, instead of Shirley taking me places Joy took over the role and gave Shirley her independence back too.

She was a great motivator to me and I decided that together we would spread the word about our charity starting with talks in schools and to all sorts of community groups in the Swindon and North Wiltshire area.

She guided me to to talk to about 10,000 people over a five year period and was a great ambassador for our local branch and for the national charity too.

She took me to Swindon Borough Council offices where we attended meetings about re-development plans within the town and helped to show why Guide Dogs campaign for so many issues that will help visually-impaired and blind people to lead a normal a life as sighted people.

She became my eyes, my guide and my left arm and she became a celebrity within Swindon.

Sadly, at the age of eight and a half years she had to be put to sleep. On the Sunday we went out for our daily morning walk which she seemed to be ok, we went out to a family Sunday luch but on the Monday morning she was suddenly taken ill and we rushed her to the vets and after a few hours after having a scan they diagnosed a tumour in her intestines and advised us to say our goodbyes and she was then put to sleep.

Shirley and I were absolutely devastated and shocked on how things deteriorated so quickly and not only did I lose my eyes again but lost a truly great friend who was loved by everyone who came into contact with her.

She was a Joy by name and a joy by nature and she is sadly missed.

There will be another guide dog that will help me get around again but there will never ever be another Joy.

Please help me celebrate Joy's life by fundraising in her memory.

The ability to get around is vital in order to live a full life yet thousands of people with sight loss never leave home alone. We empower visually impaired people to do that and rely on the support of the public to fund the guide dog service.