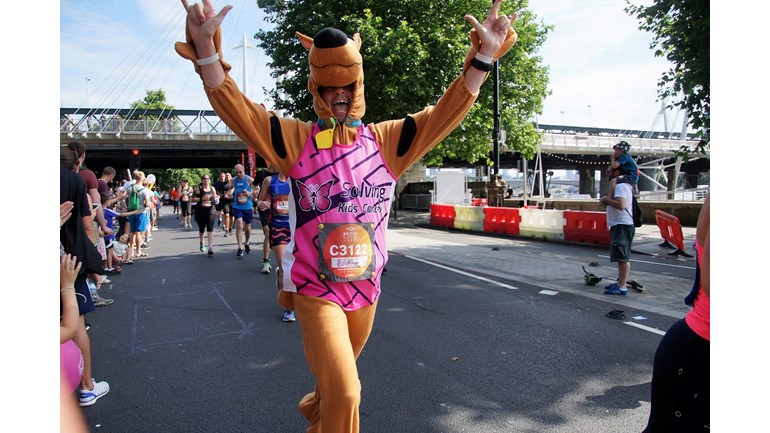 We fund research and support families to access clinical trials for children.

On July 11th it will be 4 years since our beloved middle-sized boy Adam died from the hideous disease that is neuroblastoma. To mark this date, and because Solving Kids' Cancer needs all the funds and help it can get if we are going to make a difference to future families like my own, I am running 4 marathons in 4 months to raise desperately needed money to help fight our cause.

I had it all figured out.

Having run a marathon in 2015 (for the wonderful charity Rays of Sunshine), I can't just do the same thing again can I? I need to take it up a notch if I'm going to ask people to sponsor me.

Then I get to thinking some more, and it all starts coming together. We first discovered that Adam had a tumour on his adrenal gland on 15th July 2009. He died 4 days short of 4 years after he was diagnosed. My final marathon in the sequence is 4 days before what would have been Adam's 14th birthday.

And then I run 70 miles at Endure24, feel great, run a long 16 miles in the blazing heat the weekend after, and then a hard interval session on Tuesday.

And injure myself. Strained iliopsoas. Can hardly run for three weeks. And what little I do causes further problems with my knee.
My first marathon is at the beginning of August. I haven't run one long training run (18-20 miles) and likely won't be able to. I'm gutted. And an idiot. Doing it in memory of Adam and I've messed it up before it's begun. I'm so annoyed with myself.
And then these past few weeks have been filled with children dying from neuroblastoma, and anniversaries of children who died from neuroblastoma. It's been relentless. NEUROBLASTOMA IS RELENTLESS. More needs to be done, more research is needed. More clinical trials, faster and better access to better options. Like it or not charities drive forward research. That doesn't mean government money isn't used, it doesn't mean pharmaceutical companies don't contribute, but without initial grant awards from charities, trials would not get off the ground.
So it's back on. Only different. I'm going to run 4 marathons in 4 months each in under 14 hours -- now I have absolutely no excuse!  They are; Gloucester 6th August, Richmond 17th September, York 8th October, and finally the New York City Marathon 5th November.
If people like me, who've lived it in the past, don't do something to try to help the children and families of today and tomorrow, who will?

Now more than ever I genuinely believe we have a chance to make a difference. But we have to work hard to for it.

If you've read this far, thank you. I only have one more thing to add.
By a quirk of fate the last of my 4 marathons is the big one, the New York City Marathon on 5th November! 15 years to the day since the death of Robert Foot, a friend from school, in his early 30s. Rob died of Acute Lymphoblastic Leukaemia, a disease that is much more common in children than in adults. By another quirk of fate I reconnected with Rob's family, having not seen them for many many years, just a few months before my own son was diagnosed with cancer. His family have done wonderful things in Rob's memory (http://www.rflf.org.uk/index.htm) and I will be thinking of them all when I run in New York.

Charity Registration No. 1135601
Find out more about charity fundraising