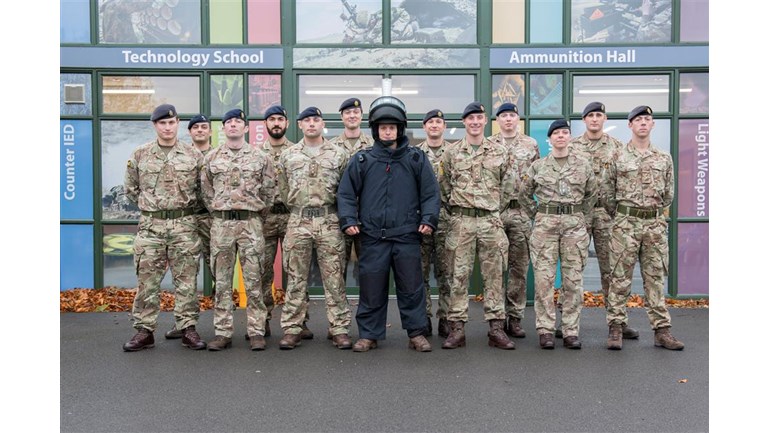 Mark is hoping to break two World Records for the fastest Mile and fastest Half Marathon wearing a Bomb Suit for the Felix Fund Charity.

The team of 13 Officers are currently on the 20 month Ammunition Technical Officers’ (ATO) course to qualify as ATOs. Upon successful completion, course members will join one of the Army’s Explosive Ordinance Disposal (EOD) units, including 11 EOD Regiment who provide the UK's domestic Bomb Disposal capability. The course and training is giving all of us a unique insight into what it takes to wear the suit and the dangers faced by those who do. The Felix Fund is a small charity which works to support the Bomb Disposal and Search community which, as shown very publicly in the news recently, is becoming ever busier. It focuses on the mental and physical health of the EOD and Search community and at its heart is a desire to reduce the mental stress caused by conducting these duties. To this end, we want to raise as much money as possible for a charity doing great work supporting the people who are carrying out extremely dangerous and essential tasks.

To raise this money and hopefully some awareness, Mark and the team hope to break two World Records. The first for the fastest mile in a Bomb Suit which he must run in under 8mins 38secs and then the fastest Half Marathon in the bomb suit which he must run in under 3 hours 15 mins. Mark is aiming to break the mile just before Christmas and break the half marathon at the Bath Half 2018. The suit is made of Kevlar with a 12 pound (5.4kg) helmet, designed to protect the ATO when they approach, work on and come away from an explosive device. It is very heavy and restrictive but also extremely hot as the suit does not ventilate. In the end it is heat rather than the weight of the suit which becomes the most problematic to those wearing it, especially in hot climates. It is impossible to make the record attempts alone, so the rest of the course are supporting Mark throughout the training and at the events themselves. Members of the course run on each training session providing everything from medical cover and water and ensure that Mark isn’t slacking!

This is a team effort for an extremely worthwhile cause and we hope you will give generously.

If you would like to contact us about potential sponsorship/questions or for any reason please email to felixato58@gmail.com

Felix Fund supports bomb disposal experts and their families. We provide welfare assistance and financial support for anyone who has assisted with bomb disposal duties; across all three services and the Met Police Counter Terror Unit SO15.

Charity Registration No. 1142494
Find out more about charity fundraising