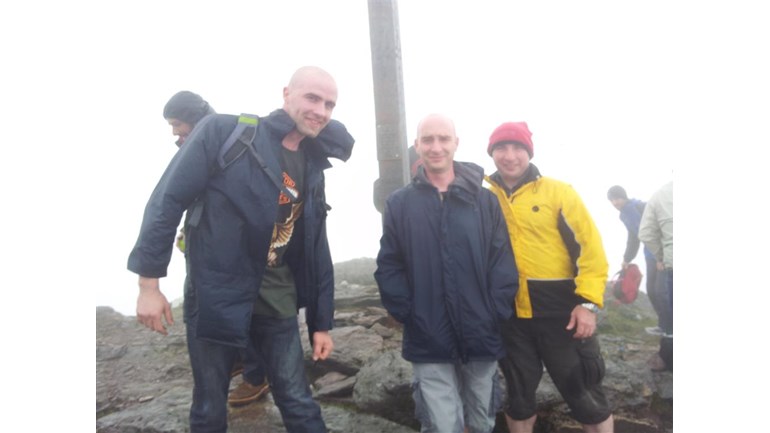 In July 2019, on my 39th birthday we lost one of our closest friends; John Blaney to a tragic accident. (John is far left in our team photo.)
It is in memory of John and the incredibly positive impact he had on so many lives, we have decided to take on this challenge.
The challenge is the UK and Ireland 5 peaks. That is to climb the highest peaks in Wales, England, Scotland and Ireland, North and South. We will climb Snowdon, Scafell Pike, Ben Nevis, Slieve Donard and Carrauntoohil in that order hopefully all within 48 hours.

The story started back in 2013 when a few of us had discussed taking on the UK and Ireland 5 peaks challenge. At that time we ended up not taking on that challenge but instead John Blaney and I completed the UK 3 peaks 24 hours challenge (highest peaks in Scotland, England & Wales). In July 2020 my brother Seamus and I will go back and finish the job.
My brother’s wife Gobnait and her brother Paddy will be our support crew and drivers. For this we are extremely grateful as the amount of driving involved is a huge challenge in itself!

All expenses for the challenge have been paid for by ourselves. Sponsorship goes directly to Air Ambulance NI.

Air Ambulance NI, in partnership with the Northern Ireland Ambulance Service (NIAS), provides the Helicopter Emergency Medical Service (HEMS) for NI. Serious or life-threatening situations can happen to anyone at any time and on average every day one individual finds themselves in need of AANI.

Charity Registration No. 103900
Find out more about charity fundraising