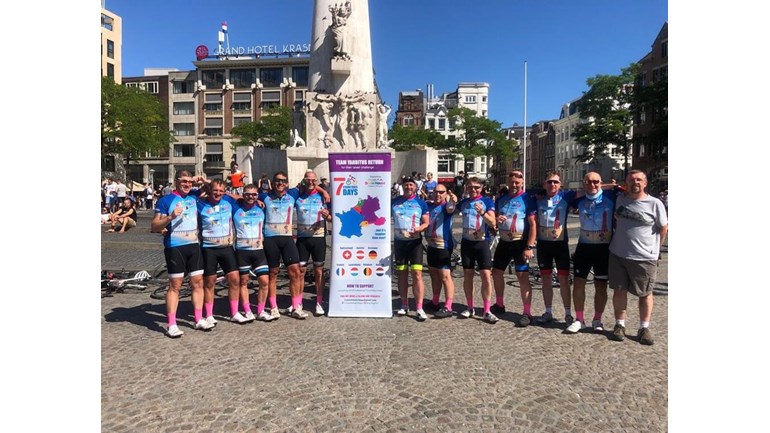 We provide compassionate care and support to patients and familes in the Fylde Coast.

Team Yabbitus is a group of friends from Blackpool, who are committed to supporting their local Children’s Hospice, Brian House.

They formed in 2012 and undertook their first challenge in May that year, when they cycled from Blackpool Tower to the Eiffel Tower in Paris, France.

Brian House cares for children and young people in Blackpool, Fylde and Wyre who have life-limiting Illnesses. They provide respite care and support for families. It costs over £1.2 million a year to operate and Brian House is not part of the NHS – it is mostly funded from the Fylde Coast community.

They aim to be a ‘force for good’ for Brian House Children’s Hospice through:

What they have done so far

2015 – Eiffel Tower, France to the Leaning Tower of Pisa, Italy

They have raised approximately £72k in their efforts so far and would love to get to £100k (cumulatively) by the time they complete their ride in June 2019.

This team is unique, as each year they have raised funds, they have self-funded and personally met all costs for the trip. That has meant that every single penny raised has gone straight into the pot for Brian House.

This is not just a financial sacrifice for the team - it is the time taken to make this happen. From time away from their families to planning and execution of the event - which takes around 12 months to complete - there are also hundreds of hours training in the saddle needed to reach the required fitness levels.

What are they trying to do?

On 22nd June 2019 they have challenged themselves to cycle over 700 miles, through 7 Countries in 7 days. Starting in Switzerland, then Austria, Germany, France, Belgium, Luxembourg and Holland.

They will be holding various events throughout 2018 and 2019 to raise awareness and funds towards their goal and aim to inspire others to take action too.

They would love to tell you about opportunities to help Team Yabbitus achieve its goal in 2019, depending upon the sort of activity you would be interested in. This could range from sponsoring a shirt to donating a raffle prize, to helping them with a Minibus as a support vehicle.

In 2013, the Team were recognised through Blackpool Council’s ‘100 Acts of Kindness’ award scheme for their achievements to date.

In 2015, the Team were awarded a ‘Hero’s in the Community Award’ by their local Radio Station – Radio Wave. This was for services to Brian House through their efforts to fund raise and create awareness.

Trinity Hospice and Brian House Children's Hospice provide specialist palliative care to adults and children across the Fylde Coast and much needed support for their families. Our services are available free of charge, but with limited government funding we need to raise over £5 million every year.

Charity Registration No. 511009
Find out more about charity fundraising