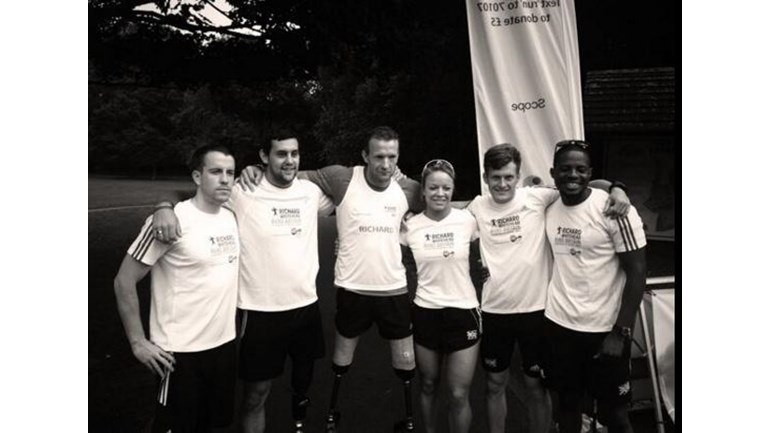 I am going through 26.2 miles of marathon pain for Sarcoma UK because of Richard Whitehead

We fund sarcoma research and offer support to ensure patients get the care they need.

The reason for running the London Marathon for Sarcoma UK is an obvious one for me. In 2013, I joined Richard Whitehead on his quest to run 40 marathons in 40 days. This was a mammoth feat in itself, but for Richard it was an even bigger task. In completing 977 miles, he became the first double leg amputee to run the length of the country.

I was fortunate enough to run with him for some of the journey (only 20km - I'm not crazy) and this was an experience that I will never forget. In the process, Richard raised hundreds of thousands of pounds for Sarcoma UK and Scope, which will change the lives of countless individuals in the future.

Many will know Richard as the sprinter flashing his biceps crossing the finish line to win 200m gold at the London 2012 Paralympic Games, but vanity aside, he is one of the most selfless, inspirational person I have ever met and been fortunate enough to work with.

Richard, who is a patron of Sarcoma UK was inspired by the late Terry Fox, who was diagnosed with sarcoma, which forced him to have his right leg amputated at the age of 18. Undeterred by his cancer battle, Fox attempted to run from the East to the West of Canada. After running nearly 3,500 miles over 143 days, the cancer spread forcing him to end his quest. Just over six months later, Fox died at the age of 22 but his legacy lives on.

I've always said to myself that I would have a go at the London Marathon to tick off one of the many things on my bucket list.

While running comes naturally to some people, it's not for me. First of all I'm not a fan of running, which makes training difficult and secondly I am already a laughing stock among my friends for being labelled a 'sicknote' for my endless run of injuries. However, this year is going to be different and I am determined to ensure I make it through the 26.2 miles even if that means crawling over the finish line at the end! Starting training on January 1 (after another injury) means that I will probably be on all fours at the end!

I'm hoping that I can emulate Richard's tattoo on April 24 - 'Cometh the hour, cometh the man'

Any contributions no matter how big or small are greatly appreciated by myself and I'm sure Richard and Sarcoma UK too.

"Life need not have limits. Having an opportunity in life is important, but what defines you is what you do with that opportunity" - Richard Whitehead

We are the only charity in the UK focusing on all types of sarcoma. Our mission is to increase knowledge and awareness of sarcoma through ground-breaking programmes to transform the landscape for everyone affected by sarcoma. Charity reg no. (1139869) Company limited by guarantee (7487432).