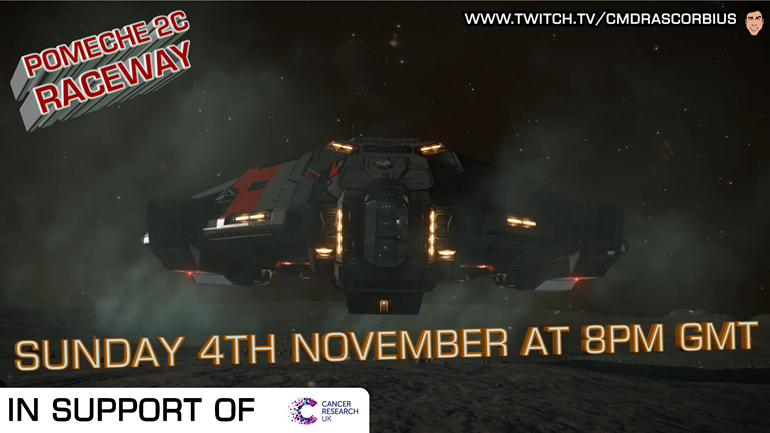 I'm racing the biggest heaviest ship in the game for Cancer Research UK because Beating cancer is gonna take Science!

On the 4th of November a bunch of us crazy commanders are going to be racing Lakon Type 9's around a canyon race track on Pomeche 2C in the game Elite Dangerous.

It's going to be a sight to behold because the Lakon Type-9 isn't exactly known as a sleek racing machine. They're basically warehouses with rockets strapped on. Affectionately known as the "Space Cow".

We've written an app to track the progress of the race  and to score the racers based on how fast and more importantly, How LOW they can fly within the very dangerous canyon circuit.

We're doing this to raise money for the fight against Cancer.
Earlier this year I lost a business partner to a battle with cancer he'd been fighting bravely for 2 years,
I have a friend who's battling his cancer with all his might and last year my Mum fought breast cancer and thankfully she's now cancer free.

I'd love to see an end to Cancer in my lifetime but we're not going to get there without some serious effort.

So I'll ask you to enjoy the race and if you can spare a few quid, let's see if we can make at least a bit of a dent in the armour of this disease.