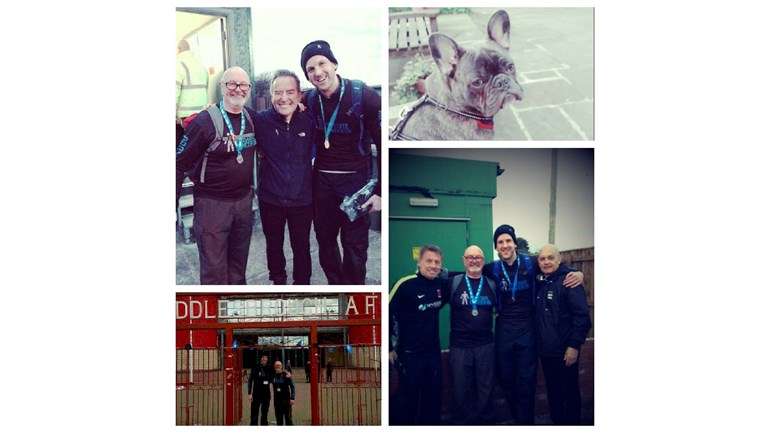 Welcome to our Just Giving page. As a family we’re raising money for Prostate Cancer and Men United after my Dad George beat prostate cancer in 2015.

Intro (from Becky) : No one who meets my Dad forgets him; he’s an unbelievably driven, inspirational man who last year didn’t consider that he wouldn’t be ok. He’ll tell you he was lucky and he probably was but his attitude throughout was inspirational to us all. He’s lucky enough to have Karen by his side, to us she was/is a rock and never wavered. Both of my brothers Sean and James live away from home, so Rich and me have stepped up to jump out of a plane and walk a marathon to keep Dad company!

Over to my Dad…

Well, where do I start!

I started to experience some issues down in the engine room, occasional difficulty passing water, up through the night a couple of times (Karen said that’ll be that eighth Black Sheep you had last night !), Mr. Midnight wasn’t his normal self (Karen said that’ll be that eighth.......).Things just didn’t seem right. Went to see my GP who said let’s keep an eye on it, any change come back. Christmas came and went and had my regular Wellman check-up about March time.

The GP said while you’re in we’ll take a separate sample for a PSA blood test (Prostate Specific Antigen) and get it checked. The phone rang two days later, the doctor saying we need another test. Got the second test done and the doctor rang to call me in.I thought uh oh, so went along with Karen. The GP said you should have a PSA reading of about 0.5 to 0.6, yours is 5 to 6, a real borderline case of do we investigate further or just keep an eye on it. Karen to her credit said no borderline here Doc, he’s going in. Went for further tests, scrapes (oooh),etc, the Doctor saying all seems to be ok, no enlargement, pain, etc.

Got a call from the specialist nurse saying you need to come in see the Consultant. Took Karen along with me again, both thinking just be a routine appointment, we’ll keep an eye on you, etc, forming this opinion from what both the GP and the Doctor had said. Sat down with the specialist nurse and the Consultant (both super people) and he started asking the same questions but from a different angle, then said your Gleason Figures (taken from the scrapes) are not what they should be.

Stared at him waiting to hear what he was going to say next then BANG, I’m sorry to tell you but you have Cancer. The world stopped. I looked at him, to his credit he kept his direct stare at me and didn’t say a thing. Few minutes of composure, dry the tears etc, then right doc what’s the options.Went through the options, about 5 or 6 of them, radiotherapy, chemo, removal among them, along with the side effects. Karen said to the consultant, no options but one, it’s coming out.

Our decision had to go to MultiDisciplinary Meeting, where everybody has their say, but we got our way and arranged to have the Prostate removed on 20th April.It’s about the size of a walnut, (but it’s a mighty important walnut to us fellas!) so I naively said well it’ll just be a local anaesthetic then doc will it, that brought a smile to his face! He said you’ll be out for 5 to 6 hours. It’s all done with robotic surgery by the consultant (absolute magician) who came to the bed next day and told us that it was aggressive (giving the type for it) but said that it had been confined to the prostate and hadn’t spread. Gerrin! Back of the net! He had managed to remove it without causing nerve damage (including the IMPORTANT ones;o)) and gave do’s and don’ts and I’ll send you a letter. Took the next 6 weeks off work and formed a good relationship with a catheter and a district incontinence nurse.

The letter came saying I’ll see you 15th December but you need another PSA test done before you come in.

We both went in and he said that PSA has come back with a reading of 0.5, hardly recognisable and I’ll see you in six months, MASSIVE PHEW! Karen said the last time we saw you Mr. Consultant (not allowed to give out their names), I was in floods to which he replied “there are three types of PC patients that I see, one: I don’t really need to do anything for except regular/watchful surveillance, two: I can do something for, and three: there is nothing I can do” SOMETHING or NOTHING that is the fine line. We thank God that I WAS one of the lucky ones and caught it in time. These people are absolutely first class.

Sorry to go on a bit, but some aren’t going to be in the extremely fortunate position that I am now in, so myself and the family have decided to put something back in the form of fund raising for Prostate Cancer UK and Men United. Being a mad mag we have called it “Beeby’s Hat-Trick”

My daughter’s boyfriend Richard and myself are doing the marathon “Walk with Jeff” Stelling from Sky Sports(he is walking ten marathons in ten days ending up at Wembley (Jeff is also doing it for Men United and Prostate Cancer UK). We are doing the first one from Hartlepool FC to Marske on March 21st.

My daughter Becky and myself are doing a Skydive on 15th April (Sheeeeeeeit).

A magnificent VIP Premier League match day at NUFC (Yes, I know, all you SAFC will be saying get it this season because you’ll not next season, blah, blah, blah ;o)) and a signed first team shirt. All donations will be given a number and Sharon Howey and Debbie Dean from NUFC will draw out the lucky number.

We have set ourselves a target of £5,000. We, Men United, PCUK, and the Freeman Hospital would be delighted if you can support our cause.Helping support us in this fight means if this saves just one fella from an early death then it’s “job done.”

Finally, I sincerely hope that this hasn’t been a chore to read and that it has provoked some thoughts and that you will support us in our aim. I was lucky others, won’t be, let’s give it a right good go to beat this horrible blight on life in all of it’s forms.

Thanks for your time and take care.