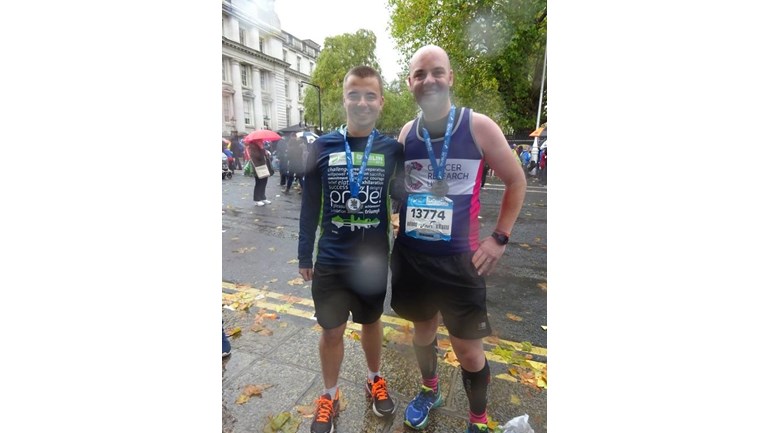 Running my 17th Marathon #15 for Lets Invest In ME Research

Hi, I'm running as many Marathons as I can for Lets Invest in ME Research.  I'm hoping to hit number 20 in 2019, running number 16 Saturday 16th February!!

Why choose Invest in ME Research?

﻿I've chosen this charity after ME/Chronic Fatigue Syndrome/Postviral Fatigue Syndrome hit me pretty hard when I was in my late teens and hit my wife Debbie even harder in the last couple of years. It's like a flu that never seems to go away, leaving you totally drained by even the simplest of tasks. It's a widely misunderstood condition, or range of conditions, that may well cover several illnesses which happen to have similar symptoms.  It can range from a shorter term setback to a long term severe case where the patient is bed-bound for years.

ME is biologically proven.

You can make a difference right now!

ME is as confusing for the medical profession as it is for the patient - there isn't even really clear agreement on what to call it, although "ME" is becoming the recognised term. Some of the long-standing research into treatment has been discredited and may even make patients worse, leaving both patients and GP's confused over what to do.  However, there have been some really encouraging results from studies across the world into new treatments which Invest in ME are supporting further research into.  The iron is currently hot - the medical and research communities have a new impetus to tackle ME head-on and there is some real momentum building behind a renewed collective effort to get to the bottom of this condition. There is no better time than now to support this charity.  If you're interested I'd encourage you to check out

I've also been inspired by my mate Mike Harley who is running a marathon in every country in the EU so I'm out there giving him a bit of moral support. Check out mikeseumarathons.eu for details of his inspirational challenge.  That's him with me in the pic btw (the pocket rocket) - this was the last time we ran Dublin together. We've also run Malta and Barcelona marathons 'together' (i.e. me miles behind him!).

And finally.. On a personal note I never thought I'd run a marathon.  I've now run (and walked a bit) twelve of them.  Due to ME hitting me around my GCSE's and A-Levels I gave up my first sport of Hockey, which I loved, for around 5 years and honestly never thought I'd get to feel fit again.  It's depressing (big and small D) and frustrating and I know how lucky I am to be able to go out and do things like this and push myself again.  So I'm partly doing it for me, as a challenge and because I can; and I'm partly doing it as I'd like to think that someone with ME might read this and it might help them to see the light at the end of what can be a long old tunnel.  If you're living with ME right now then hang in there, it's tough.. but you're tougher!!

Thanks for reading my page and thanks for any donation that you make, it really will be put to great use by a great charity.