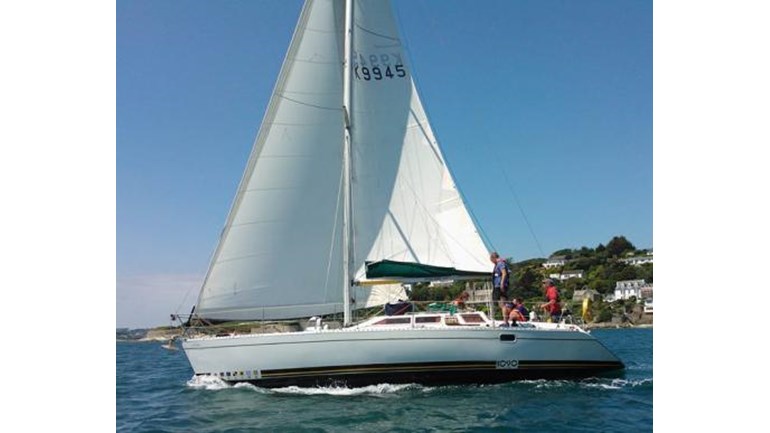 SAIL 125 MILES, CYCLE 140 MILES, RUN 29 MILES for St Luke's Hospice Plymouth because of the fantastic job they do.

The SW 3 Peaks Adventure Race, taking place between 17-19th June 2016.  This race is for teams of sailors and cyclists/runners, ( a team of 6 members in our case), of whom 4 are sailors and 2 cyclists/runners who are tackling the land challenges together.

THE COURSE:  2 crew members must run a 5 mile loop of St. Mawes to St. Just before rowing out to join the crew on the yacht.

2 crew members cycle from Newlyn to Porthcurno, where they leave their bikes before running along the costal path to Lands End - the first 'Peak'. They then run back to their bikes and cycle back to the waiting yacht.

2 crew members cycle from here to Bolventor (near Jamaica Inn) where they leave there bikes and run to the top of Brown Willy, the second 'Peak' and Cornwall's highest point, they then run back to their bikes and cycle back to their yacht.

2 crew members cycle from here on the coast to coast cycle route to Meldon Reservoir near Okehampton, leave their bikes and run to the top of Yes Tor, the Third Peak and Devon's highest point. They then run back to their bikes and cycle to the finish in Plymouth.

This leg starts as soon as the 2 cyclists have been dropped off.

All meet back in Queen Annes Battery Plymouth to finish.

Well, we are nearly there, the sailing crew have been working well together with a respectable second in the Hooe Point Sailing Clubs, offshore race on Sunday 5th June, together with a series win in the clubs Tuesday evenings racing programme.

The cyclists/runners, Jon and Stewart have been training equally hard, with Jon recently completing the Glasgow Triathlon and subsequently qualifying for the Triathlon World Championships being held later this year in Mexico.

Simon and Vida, our shore support team, have been meticulously planning haw they are going to get the bikes, food and additional equipment into our small van, but the plan is looking good!!

We will be setting off from Plymouth, early on Thursday morning for the start in St.Mawes, hoping to arrive to see at least some of the Wales - England match.

Thank you all for the fantastic support, so far, especially the generous contributions to our nominated and worthy charity St. Luke's Hospice in Plymouth.

St Luke’s Hospice Plymouth provides free end of life care in Plymouth, South West Devon & East Cornwall. 50% of our patients were cared for at home, 27% at Derriford Hospital, 5% at Turnchapel and 18% were lymphoedema & outpatients. St Luke's-caring for you no matter where!