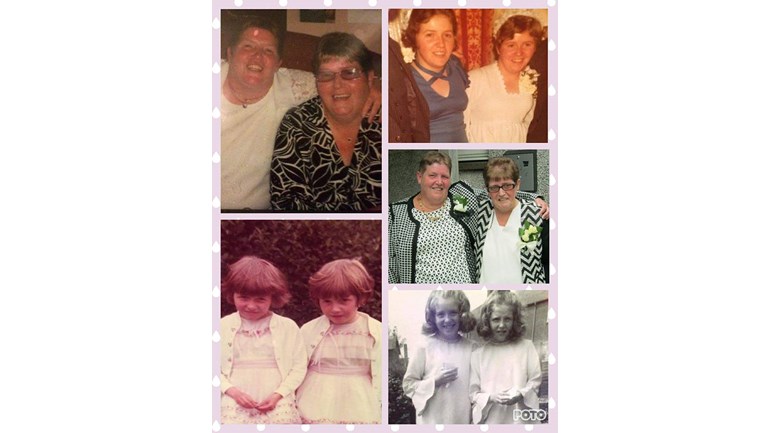 In loving memory of the Ireland Twins (Jeanie & Emily)

We raise sepsis awareness & fund research to save more lives.

Welcome to our Just Giving Page! Please take a moment to read our Journey. Our Mum fought Sepsis twice, she won her first battle but unfortunately she lost her second battle :( x

In 2013 our Mum contracted Sepsis whilst in Hospital. On 31st December 2013 on New Years Eve we received a telephone call from the Doctors and we were informed to make our way to the Hospital as our Mum had deteriorated for the worse, we panicked and sat crying in the car on the way down to the Hospital wondering what has happened. When we arrived at the Hospital our Mum was being transferred to Intensive Care we were put into a family room and the doctor advised our Mum was very poorly, we stayed the whole night taking it in turns to sit by our Mums bedside, holding her hand and speaking words of comfort to her in the hope she could hear us. I telephoned all the family around 7am in the morning and told them the news, they all made their way to the Hospital.

On the 1st January 2014 at 1pm we were given the worst news that our Mum was deteriorating and the doctor advised he was 50/50 about putting our Mum on a Life Support machine. We asked him to please persist and give our Mum some hope, some chance to fight! We cried and told him we need to feel we have done everything we can, please put her on the life support machine and give her a chance!

The doctor proceeded to ventilate our Mum. These days seemed very long and each day we arrived we were informed no improvement. Our auntie played Queen on her ipod for our Mum as our Mum loved Queen's music in the hope it would wake her up and show her we were all there. Mum showed slight sign of improvement so after 10 days the doctors decided to take her off the life support and see how she reacted. Our Mum reacted well and went on to make a full recovery! She looked fab upon her return to the family home after nearly a 5 month stay in Hospital.

3 years later in January 2017 our Mum became not well, she was shaky and had shortness of breath. We called out the doctor on 4th January 2017, Mum was given antibiotics for Urine Infection and Chest Infection. However one day later there was still no improvement her breathing was becoming even shorter and upon checking her urine there was hardly any produced! My brother phoned the doctor on the 6th January 2017 the doctor advised as Mum was struggling with her breathing he would feel better if he admitted her to Hospital to get checked over.

Upon arrival to the Hospital Mum was deteriorating! A nurse attempted to obtain blood but our Mum had bad veins and she was always quite hard to get blood off therefore the nurse telephoned for a doctor to take blood from Mum. Eventually once the doctor came they took one look at our Mum and telephoned for a team to appear as our mum was very sick.

On Saturday 7th Jan 2017 Mum was admitted to Medical High Dependency at 5am she underwent a chest X-ray. The doctor advised as there was no urine output they were going to do a kidney scan however they did not want to put any dye into our Mum as this might damage the kidney more, therefore our Mum had to get a different type of kidney scan. We sat patiently as the doctors were going to have a meeting about our Mum by this point our Mum seemed more settled she was not awake though. At 12.30pm in the afternoon the doctor spoke to our family to advise our Mum had a small hole in her bowel and it was leaking and our mums kidney was not working and not producing any urine. The doctor advised there was only one option as they could not operate to fix the hole in her bowel as Mum was very sick and she would most likely die on the operating table therefore this left only one option to treat the Sepsis with antibiotics and hope that it would kick starts the kidney, we were told don't loose hope though, we sat crying in the family waiting room this was serious! We couldn't believe it yet again Sepsis had took hold of our Mum! We cuddled each other crying - WHY HER! WHY OUR MUM! We then had to make those dreaded phone calls to all the family again. We told them to make their way to the Hospital as the next 24 hours were critical.

Having been in this situation before we knew what all the machines meant the heart monitor, the oxygen monitor, the blood pressure monitor! The beeping sounds echoing through the hospital room where Mum was. We sat with our Mum holding her hand, talking to her in the hope she could hear us, telling her come on mum fight this, you have to fight this! Our Mum's twin sister & sister, brother, sister-in-law, mother-in-law, nephews, close friends and niece all sat by her bedside talking to her in the hope she could some how hear us. At 8pm the doctor advised there was still no sign of improvement and the next 24 hours were still critical. Again we took it in turns to sit by Mum's bedside.

At around 11.10pm the nurse came into the room and turned down the machines. We seen Mum's heart rate was dropping, her oxygen was dropping, her blood pressure was dropping everything was dropping! We knew what this meant our Mum wasn't going to win the fight our Mum was dying. The nurse said "you will have seen the machines there" we replied "yes" she then advised "I have telephoned a doctor and I am going to switch the machine to privacy". We cried and cried and cried! Our partners went and got the rest of the family and we all gathered round our Mums bed. We held her hand and stroked her head. We talked to her telling her we were going to look after each other. Each family member gave her a kiss and whispered their goodbyes. We told our Mum "go Mum we will be okay, go and get your Mum, Dad and Brother Billy". Sadly at 11.30pm on 7th January 2017 surrounded by family and friends our Mum lost her battle with Sepsis 💗

Little did we know that in the same year 11 months later we would be called to the same room, to be told the same word "Sepsis has taken another loved one".

On 16th December Mum's twin sister Jeanie was admitted to theatre the doctors advised they needed to operate quickly as Aunt Jeanie was deteroirating, the family were advised Sepsis was attacking the blood stream because her bowel had blocked.   Aunt Jeanie was in theatre for over 7 hours, the family waited and waited, clock watching wondering if she would make it through this, if she could win this battle just like Mum she did years ago.  The family were hopeful Aunt Jeanie had the fight in her, if anyone could fight this Aunt Jeanie could!

After hours of theatre, the doctors appeared in the room, we were told Aunt Jeanie has suffered multiple organ failure whilst in theatre, and the next 24 hours were going to be critical.   Aunt Jeanie was on a life support machine in ICU, she was wired up to every machine, them all beeping away, supporting her in every way.

on 16th December family were hopeful when we arrived to the Hospital, only to be told Aunt Jeanie had deteroirated over night and she had to put put in kidney dialysis to support her kidney function.  We took it in turns to sit by her bedside in pairs, speaking to her, telling her to fight this, in the hope she could hear us and show us she can do this!

The day went past with more family appearing, sitting by her bedside, holding her hand, telling her come on Jeanie you can fight this.  Its not your time to go yet!!

That day at 5pm, the doctors and nurses arrived into the family room, having been here before we knew exactly what this meant, Aunt Jeanie was not going to make this, as the doctor sat down those dreaded words came out "Jeanie is dying" ................ we could not believe this, not again, not our family again, this f**king sepsis!!!  We sobbed, as we were told to contact family and advise them to make their way to the hospital to say say goodbye!     As family begun phoning, the doctor came running down the corridor, I wondered what was going on ... has she made movement, is she giving signs of not giving up .....  as the nurse got closer she told us "you have to come now, Jeanie is going" .... my heart sunk, I could not believe I was loosing my Auntie, the Auntie that taught me how to stand up to Bullys, the Auntie who always stood up for us, the Auntie that was so close to my Mum ... her twin sister!  My 2nd Mum!

We gathered by her bedside, stroking her hand, telling her we loved her and to go get her twin sister Emily (my Mum).  This was heart wrenching, 11 months ago we were in the same situation.  I stroked her head and told her to tell Mum I love her, and miss her so much.  Sadly around 5.30pm surrounded by her Husband, Son, Sister, Brother and extended family Aunt Jeanie lost her battle with Sepsis too 💗

We cannot help but think about how our Mum/Aunt were seen by doctors and nurses and no-one spotted the signs. There is not enough knowledge out there on Sepsis. We are trying to raise awareness of the symptoms as it's crucial to spot these promptly within the first "Golden Hour" as it could save a life! Sepsis should be treated like a heart attack and there should be a dedicated A&E Sepsis Team in every Hospital across the UK!

Help us raise awareness of Sepsis. Sepsis is under-recognised and poorly understood due to persistent confusion about its definition among patients and healthcare providers. Know the signs and symptoms and seek help immediately.

Charity Registration No. SC049399
Find out more about charity fundraising