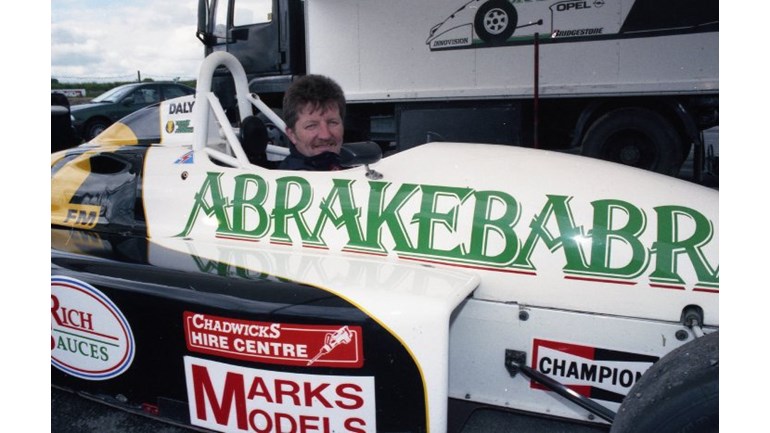 We work to eliminate cancer

Vivion Daly, an inspiration and one of the greatest ever race car drivers Ireland has ever seen. This is the story about how he lost his race to Cancer.

In August 2000, we were invited to Stormont Castle in Belfast to watch (my uncle) Derek Daly drive his Williams Formula 1 FW08 car and my Dad drive his Formula Opel car up Stormont hill in the Ulster Millennium hill climb festival, that brought together the greatest faces of Irish Motorsport. It was thrilling to see the cars of all levels fly up the Stormont hill as fast they could, especially when one of the drivers was my dad and another my uncle! It was a memorable family occasion, having two brothers recognised for their different Motorsport careers among a huge Belfast crowd.

3 days later he was diagnosed with stage 4 throat cancer. Little did we know but he had just entered the biggest race of his life and it was for his life. He started an intense period of radiotherapy and chemotherapy which saw him lose his hair and voice and left him with a daily struggle of eating, drinking and swallowing. This would not inhibit his ambitions to enter the 2001 Formula Opel championship after his treatment finished in January, or stop him from running his successful business.

He entered that race season with the same determination and commitment to win as ever before.

Unfortunately he wouldn't get to finish out the season, when he was informed that his cancer had spread to his lungs and was already at stage 4. It was a devastating blow to our whole family especially when  treatment options were limited. At the time (before his exposure) Lance Armstrong wrote a book about how he overcame cancer more than once. Dad was inspired and used it as his motivation to try everything possible.
Armstrong's Doctor was also based in Indianapolis where Derek lived. A connection was made and he flew out to Indianapolis for treatment.

He would go through the most debilitating time trying to save his life. Treatment options ranged from Ireland, USA and Mexico for different chemotherapy, radiation, Natural and organic therapies, laser light beam therapy and blood oxygenating therapies. He never gave up, no matter how weak his body got, his mentality never faded. He battled the disease like he battled any other race. Hard, determined and brave. He would eventually lose the biggest race of his life in November 2002 after a 2 year fight, but he never lost his drive.

Its been 16 years this year, and 17 since his last race in Mondello park. This year Mondello celebrates its 50 year anniversary and is recognising all the great names that have participated over the years and their achievements.

It didn't take long for myself and my good friend Emma Dempsey to come up with a wild idea one night. She asked me to enter a race with her and I said only if we can do it in memory of my Dad and raise money for charity.

It has always been a dream for both of us to race something. We grew up together in the paddock of Mondello Race circuit following our fathers racing careers. Both our Father's established themselves as top/fierce competitors in Irish Motorsport.

To honor his legacy, and to fulfill our own personal ambitions to race a car, we have decided to create our own Formula Female entry into the Historic Racing Festival in Mondello Park on August 18th and 19th 2018. We will fulfill our dreams whilst raising money for a the Irish Cancer Society.

We would appreciate any support as we take on the challenge. Two females pushing the boundaries in a male dominated sport, but one we will relish in accepting and all for a good cause and a bit of craic.

Charity Registration No. CHY5863
Find out more about charity fundraising