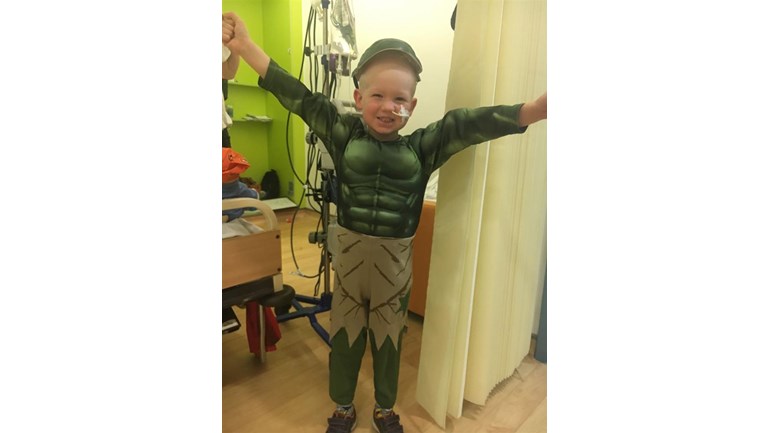 George and the Giant Pledge

So much has happened since our last update on our JustGiving page where to begin?!...
We're now at just over the half way mark into our four-year-old son George's cancer treatment. Our fundraising page for Team George and the Giant Pledge now stands at over £400,000 thanks to a combination of this donation page and all our friends, family and colleagues as well as the generosity of complete strangers running their own events for the Giant Pledge (see www.giantpledge.com/team and create your own event if you're interested!)
As many of you already know none of this money is directly for George but is 100% intended to help other cancer children and their families both now and in the future.
To date the money has funded a Paediatric Psychologist at the Royal Marsden who is specialising in a project for children with Brain Tumours, 2 Play Therapists who help guide children through their awful procedures, a Sarcoma Fellow to focus on research in this area, as well as funding the remodelling of an isolation room at East Surrey Hospital! And that's just what we've achieved as a team so far!!!
We share our story every day on our Facebook page to not only raise awareness but to raise funds for ground breaking changes in children's cancer and that's where your donation comes in!!! (See www.facebook.com/georgeandthegiantpledge and hit 'like' or 'follow' to get our regular updates)
Since our last update George has now had all his 6 rounds of intensive chemo which have knocked his little body for six. We're now onto a further eight rounds of consolidation chemo which, albeit less harsh, still make him unbelievably sick.
On the 1st of June 2017 he had a major operation to remove his tumour (a Ewing's PNET Sarcoma tumour). This is was possibly the hardest time we've had so far with the huge impact and scale of removing part of his spine, the nerve ending that was entwined in the tumour, the tumour itself and the three muscles surrounding it. They also took out the entire biopsy track for good measure. At his tender age George couldn't have had a much bigger operation.
We're now in rehabilitation teaching him to rely less and less on his new wheelchair. I say that as we're all just in awe of him and his huge progress with walking. Now it's all eye's on getting him to wear his body brace to help minimise the inevitable consequence of scoliosis as a result of his surgery. Then soon we head off to the States for Proton Therapy thanks to the NHS!!
Here's hoping funds raised through George and the Giant Pledge, that go 100% to children's cancer at the Royal Marsden Cancer Charity, will help prevent this happening to any more families!
Follow George's story on our daily blog: www.facebook.com/georgeandthegiantpledge
Find us on Twitter: https://twitter.com/giantpledge
Join our team with your own fundraiser: https://giantpledge.com/team

Or just sing along to our Charity Song at

or buy it here

(it's also on Spotify, iTunes and Google Play)

So, here we are. One month since we found our gorgeous George had cancer. And one month closer to the doctors giving us the all-clear...we hope!

The last 4 weeks has seen more days in hospital than at home (aka The Royal Marsden and their shared care hospitals). In fact, we're in what we call 'hotel hospital' now with George having just finished his second round of Chemo. Round one was pretty rough with sleepless nights, blood transfusions, huge mouth ulcers and our very frightened 4 year old struggling to understand what's happening to him.

We set up George and the Giant Pledge shortly before he was diagnosed with the aim to raise £100,000 for The Royal Marsden Hospital. That was pretty ambitious, or so we thought! 2 weeks in and you smashed it! You blew us away with your generosity and heart felt support. You're quite simply amazing!

We genuinely thank you from the bottom of our hearts. You have made this last month so much more manageable.

Assuming everything goes to plan, George has a year of intensive treatment ahead of him. We'd love to keep the Giant Pledge going for the next year as well. That's why we've decided to set a new ambitious target of *drumroll please*...

That's right, we've added a zero to the target(!)

If you'd have spent as much time as we have over the last month at this wonderful hospital (and we pray you never have to), you would see the difference every penny makes. Not just with their world pioneering research into cancers or their diagnosis, but with their treatment and patient care too.

Any amount you can spare will make a huge difference. Help the Royal Marsden Hospital save the lives of more children with cancer the world over. And hopefully George's life too.

Sing along to our Charity Song! https://youtu.be/U3iOmhIIc_s or buy it here https://giantpledge.com/buy (it's also on Spotify, iTunes and Google Play)

Join our team with your own fundraiser: https://giantpledge.com/team

We’re three days into 2017 and the doctors at The Royal Marsden hospital have just given us the news we’ve been dreading; George has cancer. A Primitive Neuro Ectodermal Tumour (PNET) to be exact. Happy New Year everyone!

We first discovered Tony the tumour hitching a ride on George’s back five weeks ago. And in the time since, George has undergone a whole series of tests and procedures, many of them painful, to determine if Tony was benign or something more sinister. Each and every result came back negative.

So we were quietly optimistic that George’s doctor was going to deliver some good news (if you can call a tumour growing close to your 4 year old sons spine, good news). Instead, the words that came out were four words that we’ll never forget “Your son has cancer”.

You often hear people describe getting bad news as being like a ‘hammer blow’. Well, it’s true – if after the initial blow, the hammer then reaches inside you and pulls your insides out. We’re completely distraught at this moment in time, this news really has knocked the stuffing out of us. But mark our words, Tony has picked a fight with the wrong family.

The next year is going to be tough, we know that. Over the next two weeks George will undergo four general anesthetics in order to confirm if the cancer is anywhere else in his little body. He'll be having a PET CT scan, a bone marrow sample taken from both his hips, a CT scan of his chest, as well as have a Hickman line go in ready to start his treatment ASAP. Treatment will ideally start within the week and, over the coming months, will include a trio of intense Chemo, Surgery, Radiotherapy followed by more Chemo for good measure. But what that cancerous tumour Tony doesn’t realise is that we’ve got all the amazing doctors and nurses at The Royal Marsden helping us every step of the way. And you can help too.

After our first visit to the Royal Marsden, we decided no family should ever experience this. That’s when we had the idea for ‘George and the Giant Pledge’. Little did we know then that George would become a regular visitor just like the kids we wanted to help.

So please dig deep. Your money will make a massive difference to all those whose lives are affected by cancer. Oh…and George still intends to keep his promise of giving every last person who donates a hug!

As some of you may be aware, our gorgeous son George has been in and out of The Royal Marsden hospital over the last month or so. And it’s all because an unwelcome visitor (Tony the tumour) decided to set up home on the base of George’s spine.

To say that these last few weeks have been the most terrifying, out of control time of our lives, doesn’t even scratch the surface. And yet, as things stand, we still don’t know what the next stage of this journey holds for us. But what we do know is that George’s health is in the best possible hands.

The doctors and nurses at The Royal Marsden do an absobloodylutely amazing job. Not just with George, but with all the kids who have had their childhood rudely interrupted by cancer. Why they don’t wear capes to work is beyond us!

The truth is we’d rather have gone through life never having had the need to make the acquaintance of anyone at The Royal Marsden (or Tony’s, for that matter). But now that we have, we want to do everything we can to help make it easier for them to do their jobs. And that’s where you lovely people come in!

We need your help to raise £100,000 for The Royal Marsden Hospital.

Now you know why we called it ‘George and the Giant Pledge’!

Every last penny of the money raised will go towards helping cancer to ‘do one' once and for all (funding The Royal Marsden’s pioneering work in cancer research, diagnosis, treatment and patient care).

You can donate right here, right now. It only takes a few clicks, we promise! Alternatively, if you’re feeling a little more creative, adventurous or masochistic you can do a sponsored run, cycle ride or similar crazy thing! We’ll leave that up to you. Just get in touch and we’ll guide you on how to get involved.

Thank you in advance for your donation. It really means the world to us. But more importantly, it will make a massive difference to all those whose lives are affected by cancer. George has even promised to give every last person who donates a hug (he loves a good hug!).

George and the Giant Pledge