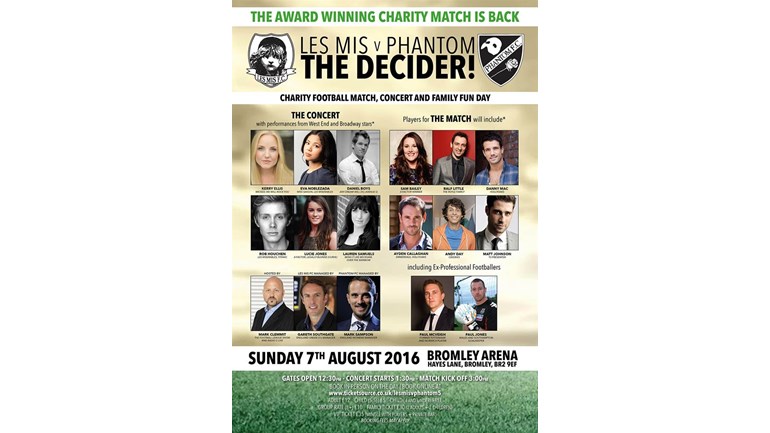 Les Mis V Phantom is back for the decider! Delicately poised at 2 matches each, it's time to find out which team will become ultimate champion! Les Misérables V Phantom of the Opera is a charity football match that has, so far, raised over £80,000 for good causes. Five years ago, Melanie Oakley-Dow, the wig mistress at Les Mis was diagnosed with cancer. To support her and raise money for her chosen charity, I came up with the idea of a football match between the 2 titans of the West End! Sadly, Melanie passed away in 2014, so this day is now in her memory. It promises to be a fun filled, family day of music, entertainment and events, culminating in a football match between the two shows, featuring celebrity players and ex professional footballers. As with last years event, this year will kick off with a concert featuring West End and Broadway stars! The chosen charity for this year is Macmillan Cancer Support. It made sense to return this year to Melanie's chosen charity and help them with the great work they do for people suffering from cancer. A substantial donation will also be made to Brake, the road safety charity.

Please help us raise as much money as possible by donating here if you can't make it on the day, or to sponsor your favourite players!