Lab42 Games
Fundraising for One Special Day 2019 run by SpecialEffect 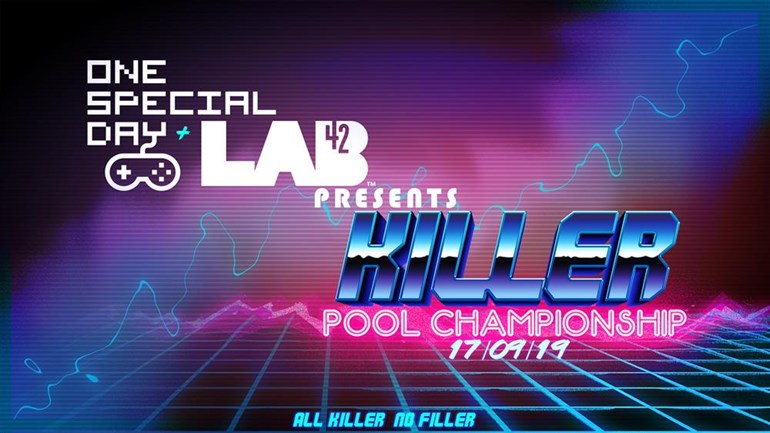 On Friday 4th of October One Special Day is back! The day when games companies are kindly donating revenue from their games and holding events to help SpecialEffect help more gamers with disabilities to play video

On Friday 4th of October One Special Day is back! The day when games companies band together and kindly donate revenue from their games and host events to help SpecialEffect help more gamers with disabilities to play video games!

Inspired by Snooker 19, this year to help raise money for Special Effect on Tuesday the 17th of September we are inviting games studios up and down the country to come and partake in the Lab42 Killer Pool Championship 2019!

Team Structure - Two teams with 4 players in each team. Each team will be assigned 1 pool cue. You are permitted to use your own cue if you have one.

Each team will list the order of their 4 players before the tournament commences. This order may not be changed.

Each shot will alternate between Team A and Team B in the order they have listed their players. For example:

Each player takes one shot. Once all four players in a team have taken their shot, order of play cycles back to the top of player list.

Each team begins a match with a pool of 5 lives. When a team with 1 life remaining loses that life, they lose the match. Their opponents are declared the winner.

The player places the white ball anywhere behind the baulk line to make their break shot.

If no legal ball is potted off the break shot, the player does not lose a life but gets another shot, on which they have to pot.

If the final ball on the table is potted, the next player makes a new break and break rules apply as normal.

Play - When it is their turn, a player must make a shot.

If the player pots a ball on their shot, then play passes to the next player on the opposition team.

If a player fails to pot a ball on their shot, or pots a ball but as part of a foul shot:

Fouls - Potting the cue (white) ball, at any time during a shot.

The cue ball, or an object ball, leave the table

Directly touching or moving any ball in any way, other than legitimately using the cue to strike the white ball as part of a shot.

Playing out of turn - In the event of the cue ball being potted or leaving the table, the subsequent player may place the cue ball anywhere on the table. That player then has two shots in which to make a pot. If they pot a ball on the first shot, they do not play the second shot.

Gentlemanly Conduct - Team members may offer advice and strategy, however, they may not provide the player at the table with cue ball trajectory information.

No player will deliberately distract or interfere with an opponent team member.

Teams will be randomly assigned to each group, the group draw will take place at Frames at 18:15.

Each team will play every other team in their group.

Positions with a group will be based on number of wins.

Ties will be decided:

3 Teams will advance from each group A,B,C,D.

4 teams will advance from group E.

All teams outside of these positions will be eliminated from the tournament.

The 16 teams that advance will be placed into a 16 player bracket.

This will be a single elimination bracket. If you lose a match from this point, you will be eliminated from the tournament.

Each competing team must have a team captain. It is the captain’s responsibility to determine the team playing order and to report game results to the event admin. When arriving at the venue all teams must report to the head of Admin (Abbey Plumb) and declare who their team captain is. The team captain will be given a badge to wear.

As soon as possible, at the end of a match, the captains of both the winning and losing teams will together find an admin and report the match result (which team won, and how many lives they had remaining).

If you are not at the venue and registered by 18:30 the games will continue as planned and games you are not present for will be marked as a team loss.

- Get yourself a team of 4
- Come up with a fun team name (always essential)
- Register for the event by donating £100 to this page and be sure to let us know the company you are representing, your team name and team players when you donate in the donation message.
- Get ready to compete!

So, what do you get if you win?

You will get a fantastic trophy, additional goodies and an abundance of bragging rights!

Don't worry if you don't win, we are also hosting a charity raffle on the night with some incredible prizes from the likes of Ripstone Games, Wychwood Brewery and The Dice Box!

If you have any questions about the event feel free to contact Producer, Abbey at aplumb@you42.com

Thank you in advance if you decide to join us for this event, we look forward to seeing you!

On Friday 4th of October One Special Day is back! The day when games companies are kindly donating revenue from their games and holding events to help SpecialEffect help more gamers with disabilities to play video

Charity Registration No. 1121004
Find out more about charity fundraising