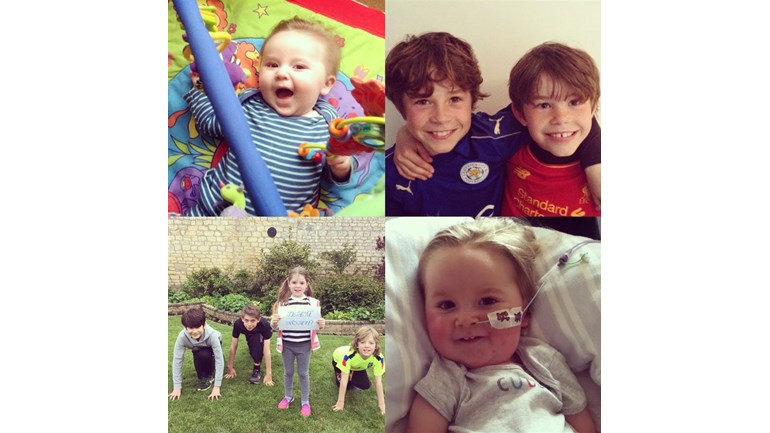 Jack, Michael, Jamie, Will, Ollie and Jessie make up Mini Team Noah and they are taking part in the Midlands Mini Mudder on 21 May 2017. They are doing this to raise money for a fantastic charity called ACT for SMA.

In July 2014 our friends, Robyn and Ed's little boy Noah was born. For 5 months everything was perfect and then at Christmas that year they were shocked and devastated when Noah was diagnosed with SMA type 1.

SMA stands for Spinal Muscular Atrophy, it is a genetic disorder that is currently incurable. SMA affects the motor neurons in the spinal cord and this results in muscles throughout the body becoming weaker and weaker. 80% of babies with SMA Type 1 sadly pass away before their first birthday.

Noah was one of the happiest babies you could ever hope to meet. He had the most beautiful big brown eyes and the cheekiest smile you will ever see.

Noah was such a fighter. Although he became progressively weaker, he remained healthy enough to stay at home where Robyn and Ed cared for him. He brought joy into the lives of all who met him.

In October 2015 Noah suddenly became very poorly and died. He was surrounded by his Mummy and Daddy and his best friend, Isambard the dog. He was 15 months old.

Throughout Noah's illness friends and family were amazing, however the family also received incredible support from the Diana nurses, Rainbows and above all ACT for SMA.

Emma and Karl founded the Ally Cadence Trust for spinal muscular atrophy. They lost their beautiful daughter Ally to SMA type 1 8 years ago. Following their experience they felt that parents with recently diagnosed children needed support and information quickly

Emma and Carl came to see Robyn, Ed and Noah as soon as they called them  and spent ages with them answering questions and discussing their experiences. They brought with them a new travel system for Noah, sensory light weight toys, monitors and a camera. They organised a long weekend at Center Parcs for them and advised them to start doing activities with Noah such as going to the beach and the zoo. They did this and created memories that they will treasure for ever. They still continue to provide ongoing advice and support. Without their help Robyn and Ed feel they could not have coped as well as they have done.

ACT for SMA were there for Robyn and Ed when they needed them most so please give generously so they can be there for the next family who need them.