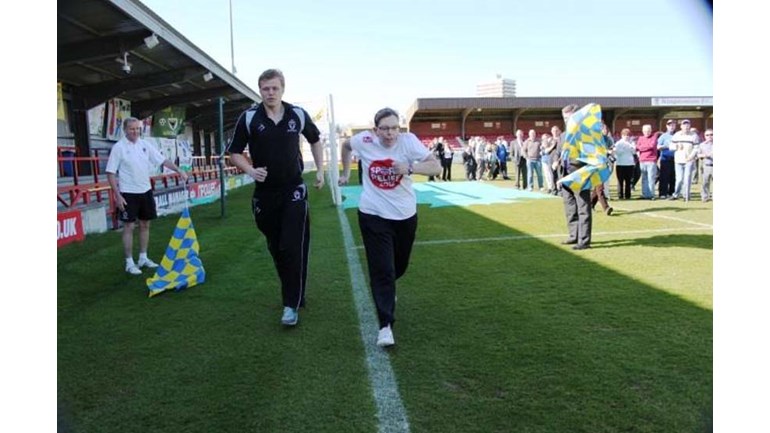 We Raise Vital Funds and Awareness to Improve the Lives of Families in Need.

Marie Miller is an adult with a learning disability who attends the High Path Centre in South Wimbledon. She is a big fan of AFC Wimbledon and along with a group of friends from the centre, attends a home match once a month.  In 2012 she completed a challenge to run a lap of the AFC Wimbledon pitch to raise money for Charity. Marie is now back with a new challenge: Ivor Heller, commercial director and co-founder of AFC Wimbledon will run from the half way line to shoot his penalty, while Marie will attempt to stop his shot! She will be assisted by our friend Haydon  Marie hopes to save his penalty on front of 4800 fans during the half time interval when Wimbledon play Rochdale on March 28th. By doing this she hopes to raise lots of money for the Paul Strank Charitable Trust - a great local charity who help many worthy causes in Merton and who have kindly sponsored Marie and the group to support AFC Wimbledon at some of their home matches.

The Paul Strank Charitable Trust has been set up to support disadvantaged families, with a focus on alleviating poverty, illness or other hardship for children. In doing so, we hope to bring some measure of relief, happiness & joy to those in our community desperately in need of compassion & support

Charity Registration No. 1167085
Find out more about charity fundraising