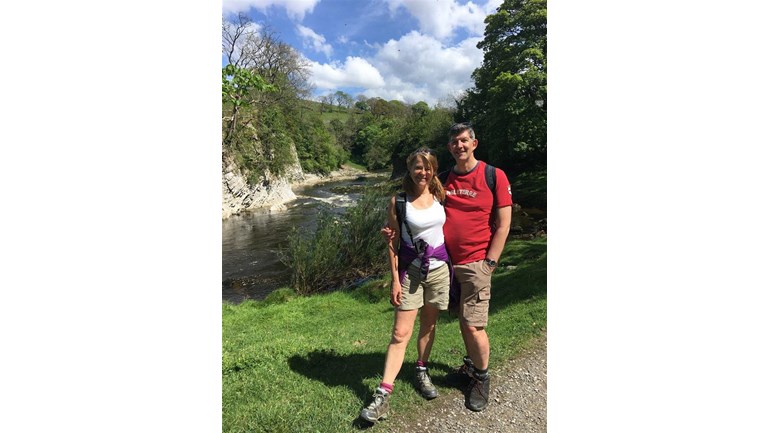 I am walking The Dales Way from Windermere in The Lake District (where Charlotte and I were married) to our hometown and my birthplace Ilkley, in Wharfedale, West Yorkshire.

The walk is 85 miles and is more commonly done in the other direction, starting from Ilkley, so I suppose that I'm doing it in reverse. As well as fatigue, bad weather and blisters, we'll be trying not to over-indulge in the excellent pubs and country house hotels along the way.

Our friends Paul and Lynda who suggested the challenge will also be making the trip with us. We all met as pupils of Ilkley Grammar School back in the 70s. Only Lynda has previously walked the full length of this long-distance footpath, which includes climbs like Cam Houses in Dentdale.

The Dales Way route was initially devised by the West Riding Ramblers' Association and was announced to the public in 1968. Apparently the first recorded successful walk along it's entire length was by a group of Bradford Grammar School Venture Scouts in 1969.

After leaving the banks of Lake Windermere, it passes the Lakeland town of Kendal, then on through some of the most beautiful parts of Yorkshire via Sedbergh in Dentdale and the limestone villages of Dent, Grassington and Kettlewell. It also passes famous landmarks like the Ribblehead Viaduct and Kilnsey Crag. We will finish by walking along the banks of the river wharfe as it flows through Burnsall, The Strid, and the grounds of Bolton Abbey.

Hopefully we will manage to raise a bit of cash for charity along the way. My Dad now lives at The Dales care home in Draughton, which is only a few miles off the route near Bolton Abbey. We have chosen to support The Alzheimers Society and really hope that ongoing research into dementia can eventually save other families from it's devastating effects.