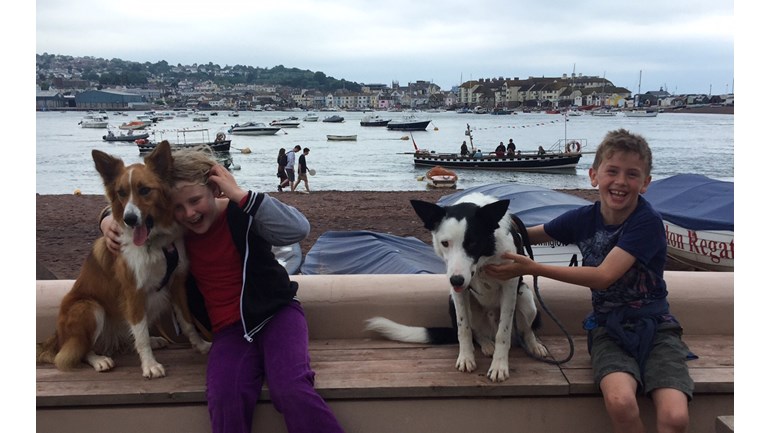 We Rescue, foster and re-home dogs to find them happy, loving homes

In 2002 we got our first dog in the City. Bodie was an amazing Border Collie. We had 11 great years out of her before she died of a tumour on her heart. Her replacement on the other hand is not quite so amazing. She’s a good looking red and white Welsh Collie named Poco. She’s wilful, pretty vocal, a digger, very warring, but a lot of fun at the same time. Two long walks a day + kids to play with, was not enough. So in September 2015, we decided we would try our hand at taking a rescue.

Patrick was delivered to us aged 11 months. Previous to us, he had already been rehomed five times, so we knew it could be a challenge. We found him through Dogs' Friends in Somerset and we took him on to foster for a period of time; just to see how we got on with it. He was delivered to us at 10pm and it was quick to see why other people had had so much trouble with him. The moment he was dragged out of the car he launched himself at me showing teeth and giving a very loud stay away bark. It was pretty terrifying, but I did my best not to show it. We then shut him in the garden with Poco. She was not amused as he jumped all over her as he tried to play the ‘conga’. After about 20 minutes I said we could not keep him, he was crazy and aggressive. Tamzin thought we should at least try until the next day. Anyway, we finally settled him down in the kitchen by 1pm, closed the door and left him. At this point, neither Tamzin nor I had touched him.

We heard nothing from him overnight, no barking, howling and the next morning our son Rex ran down the stairs to see him with me trying to catch him up to stop him opening the door without me, just in case there was trouble. We crept into the kitchen and found a very happy dog with a big wagging tail.

Now that's not the full story. He was really hard work at the start. He was terrible with men, traffic and just generally out and about on a lead.

Today, Patrick and Poco are the best of friends. He's settled into our home brilliantly and he has an almost permanent grin on his face. He still gets a big agitated with a few men, but it's improving all the time.

Tamzin takes him to Dog Agility, at which he is outstanding and I occasionally take him to the pub for a few crisps and a bit of 'strange' man socialisation.

Any support you can offer Dogs' Friends to help others like Patrick would be much appreciated. ﻿

Dogsfriends is a charity that rescues and re-homes hundreds of dogs each year in the Bristol, Bath and North Somerset areas. All our helpers are volunteers and without donations from dog lovers we simply could not afford to rescue as many as we do. May we please rely on your support? Thank you.