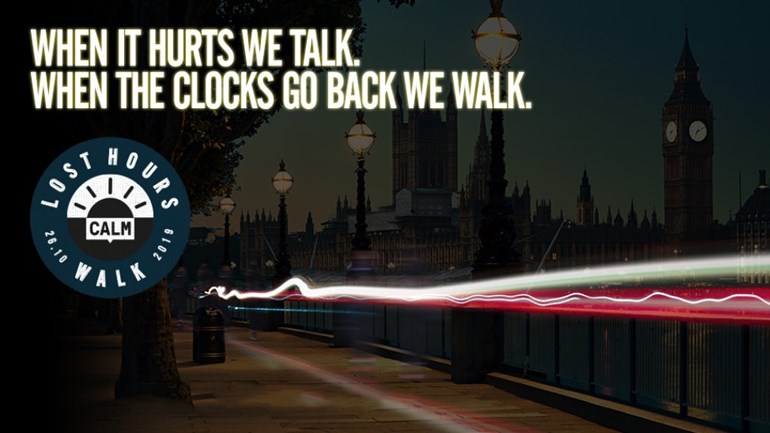 I am taking part in the Lost Hours Walk for CALM (Campaign Against Living Miserably) because it's time to unite against suicide.

When it hurts we talk. When the clocks go back we walk. 11pm, Sat 26 October: Time to unite against suicide. As time goes backwards, we're walking forwards to campaign against feeling shit, against struggling in silence, against living miserably.

As time goes backwards, I'll be walking forwards to campaign against feeling rubbish, against struggling in silence, against being alone, against living miserably.

16 people take their own life every day, leaving behind thousands of friends, family and colleagues. On the one day we are all given extra time, I'll be walking for all those for whom there wasn’t enough.

It's no secret that I struggle with my own mental health and have had many dark times - some where I've felt that I can't go on and that I've wanted out. Thankfully I've never found myself in a position where I've contemplated suicide, but I know many who have and it quite frankly breaks my heart. I also know many people who have lost friends and family to suicide and the impact it has had on their lives.

I can't begin to fathom how you get through such a painful thing as knowing that someone you loved felt the only option to end their pain was to end their life. No-one should ever be in that situation, no-one should ever feel so alone and so scared and sad that they have lost all hope of anything getting any better. But they do, and they'll continue to feel that way until something radical is done to give them the hope and support they need.

I don't know what the answer is but I know that I want to help - I want to help everyone who feels like their life is not worth living and everyone who is dealing with the magnitude of losing someone to suicide. And this walk and the money I raise will hopefully go a tiny way to help fund those lifesaving services that CALM provide.

Suicide isn't something we like to talk about I know that, but we must. In these uncertain and quite horrific times we live in, it's only going to become a bigger problem so we must start fighting it head on.

When it hurts we talk. When the clocks go back we walk. 11pm, Sat 26 October: Time to unite against suicide. As time goes backwards, we're walking forwards to campaign against feeling shit, against struggling in silence, against living miserably.