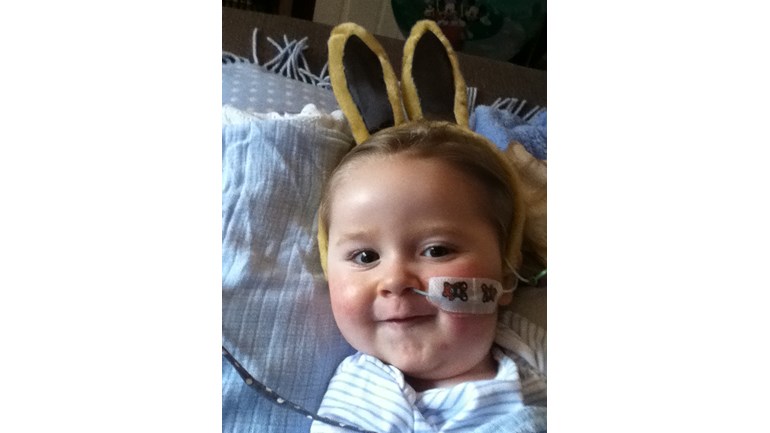 Thanks for taking the time to visit our JustGiving page;

A team of 10 close friends are doing the Midlands Tough Mudder in May to raise money for the Ally Cadence Trust for Spinal Muscular Atrophy.

On the 4th July 2014, my wife Robyn & I, were so happy when our first child was born, a beautiful baby boy called Noah. For 5 months we had no idea that there was anything wrong, then just before Christmas, after becoming slightly concerned that he wasn't moving his legs enough, we visited a pediatrician & were told the devastating news that Noah probably had a serious neuromuscular disorder. Early in the new year he was diagnosed with SMA Type 1.

SMA stands for Spinal Muscular Atrophy; it is a genetic disorder that is currently incurable. One person in every forty is a carrier of the defective gene that causes SMA & if both parents are a carrier, their child has a 1 in 4 chance of having the disease. SMA affects the motor neurons in the spinal cord & it prevents messages traveling from the brain, down the spinal cord, this results in muscles through out the body becoming weaker and weaker. SMA Type 1 is the most severe form of the disease & is generally picked up by the time a child reaches 6 months old. It is the biggest genetic killer of under 2's in the UK. About 80% of babies with SMA Type 1 sadly pass away before their first birthday.

SMA does not affect the brain at all & Noah was one happiest babies you could ever hope to meet. He had the most beautiful big brown eyes, & the cheekiest smile you will ever see. He was mischievous & so affectionate. Noah had such a kind soul, he was always calm & so patient. Above all else Noah made people smile. He brought so much joy to us & to so many people. He also loved animals & was never happier then when our dog & cats were with him.

Noah was such a fighter. He gave us 6 wonderful months before he was diagnosed with SMA & then fought on for another 9 incredible months. He remained healthy & happy for virtually every day of his life & stayed at home with us until the end. Robyn & I feel blessed to have been Noah’s parents & we will always be thankful that we had him in our lives. When you get a diagnosis of a terminal illness, you expect there to be nothing but dark & horrific times ahead, but for us there was also a huge amount of happiness & joy in between the tears.

In October 2015 Noah suddenly became very poorly & died, he was surrounded by his Mummy, Daddy and best friend Isambard the dog. He was 15 months old.

When Noah was first diagnosed we called ACT for SMA that evening. The very next day Emma and Karl drove down from Lincoln to see us. Emma and Karl are the founders of the Ally Cadence Trust for Spinal Muscular Atrophy. They lost their beautiful daughter, Ally, to SMA Type1 seven years ago. Following their experience they felt that parents with recently diagnosed children needed support and information quickly. They set up ACT for SMA to try and generate a new line of funding and to raise awareness of Spinal Muscular Atrophy nationwide and to provide support to affected families. Emma and Karl came to see us so quickly and spent hours with us, answering questions and discussing their experiences. They also brought with them a new travel system for Noah, sensory light weight toys for him, monitors and a camera. They advised us to start doing activities with Noah, such as going to the beach and the zoo, which we did, creating memories that we will treasure for ever. They continue to provide on-going advice and support. Without their help, we could not have coped as well as we have.

ACT for SMA were there for Ed, Robyn and Noah when they needed them, so please give generously, so they can be there for the next family who call them.