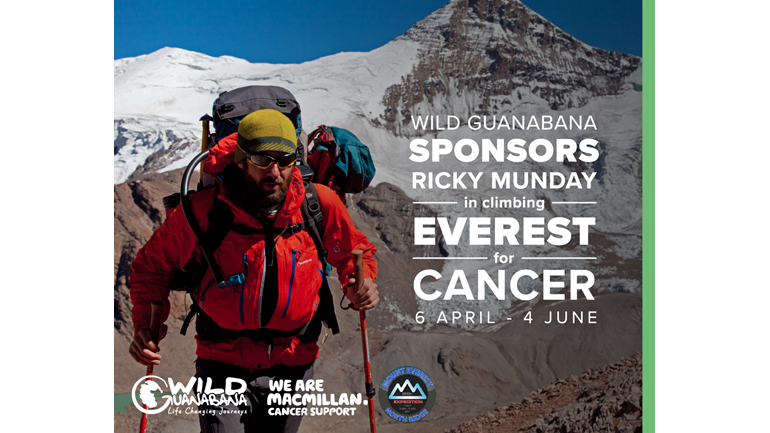 Attempting to climb Mount Everest, the highest mountain on earth

My twin uncles - Patrick and Michael McGowan - were both taken by cancer. We lost Michael in 1998 at the age of 58. We lost Patrick in 2008 at the age of 69. Their passing was devastating, but Patrick’s final weeks and months were eased by the incredible support provided by hard-working, compassionate and dedicated MacMillan nurses. The family will always be grateful for that support.

To prepare for this expedition, I have spent the last decade organising and completing twelve expeditions to the world’s greater ranges - I’ve now climbed four of the seven continental summits, and climbed to a maximum altitude of 6,962m on the summit of Aconcagua. I've attempted to climb some of the world's most iconic peaks, including Khan Tengri, Mont Blanc, Kilimanjaro, Mount Kenya, Matterhorn, Aconcagua, Elbrus and Damavand. I’ve completed solo ascents of several Grade II winter routes in Scotland and Wales, a solo ascent of Mont Blanc and an unguided attempt on the Matterhorn. I’ve climbed up to winter Grade IV in Scotland as a pair. Last year, I also undertook my UK Mountain Leader training.

Over the course of two months from 6 April to 4 June 2017, I will now attempt  to climb Mount Everest - the highest mountain on earth at 8,848m - via the North Ridge route in Tibet. This expedition is the culmination of a lifelong dream to follow in the footsteps of mountaineering pioneers and legends, and to stand on the highest point on earth. By doing so, I would like to honour my uncles' memory and raise funds to help other families who need support.

The Expedition:
The expedition is not ‘guided’, but there is a team leader who will coordinate all of the logistics and our movement on the mountain. There are group sherpas employed to carry some of the group gear, but no personal sherpas so I will be fully self-sufficient i.e. I will carry all my own gear and will be cooking my own food and melting water etc. above base camp. We will be provided with 5 bottles of oxygen each. We will drive from Kathmandu overland to Tibet to basecamp at 5,200m. We will establish four camps above base camp, with the highest camp at 8,300m, which is in the 'Death Zone' and equivalent to the cruising altitude of a commercial airliner - and where the oxygen pressure is only 36% compared to sea level.

The North Ridge Route:
This route was first attempted by a British team led by Mallory in 1921 – they reached the North Col (7,003m).  The second expedition in 1922 reached 8,320m before turning back, and was the first team to use supplemental oxygen. The 1924 British expedition with Mallory and Irvine is most notable for the mystery of whether they summitted or not. Mallory’s body was found in 1999 but there is still uncertainty as to whether he summitted – Hillary and Norgay summitted for the first time from South in 1953. A Chinese team made the first summit from Tibet on May 25, 1960. Tibet was closed to foreigners from 1950 to 1980 preventing any further attempts until a Japanese team summitted in 1980. Overall, the north side of the mountain has more technically difficulty than the south side (although fixed ropes/ladders are placed) and is significantly colder and windier. However, there is no need to cross the icefall that sits on the south side, which is inherently unstable.

Donating through JustGiving is simple, fast and totally secure. Your details are safe with JustGiving – they’ll never sell them on or send unwanted emails. Once you donate, they’ll send your money directly to the charity and make sure Gift Aid is reclaimed on every eligible donation by a UK taxpayer. So it’s the most efficient way to donate - I raise more for them, whilst saving time and cutting costs for the charity. Many thanks, and please keep up to date with the expedition preparation at: http://www.facebook.com/triple7summits