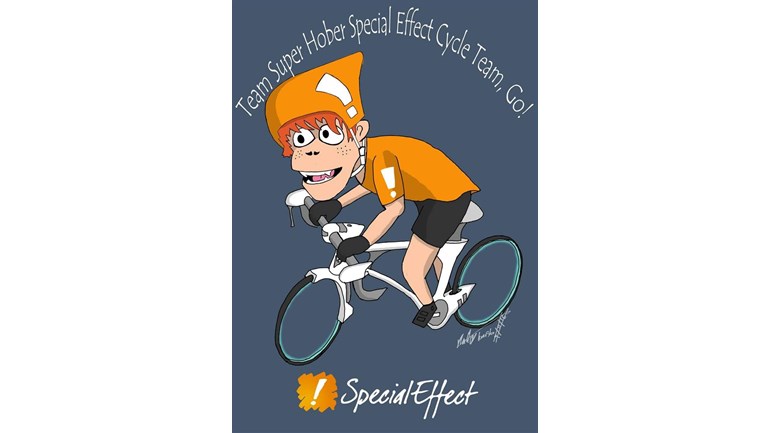 We help disabled people to enjoy life through technology

I’m CMDR Hober_Mallow if you know me from Elite Dangerous or Chris Carpenter if you know me outside of game. I’ve decided to do a charity ride of 50 miles on a bike for the amazing charity that is SpecialEffect who do amazing work by adapting gaming controllers for disabled people to provide them with the experiences that me and you take for granted.

Am I a MAMIL (Middle Aged Man In Lycra)? It’s a common term for those mad people you see rain or shine on country roads at weekends and bank holidays on their bicycles frustrating BMW driver who want to drive at 60mph everywhere.

I’d say yes in a certain respect but also no as I think I’ve got
another 11 years till I hit 40 so you may call me a YAMIL (Young Aged Man In Lycra).

How much cyling do I do?

I became a cyclist after starting a new job and only having 1 car between the family the Mrs uses it to do the school and nursery run which left me with my own power to get me to work. I cycle 6 miles each day going to and from work Which gives me a commute of 15 minutes from the top of the hill I live on through the valley to the top of the other side to arrive at work. It took me 5 months of cycling for necessity to start doing it as a hobby joining my friend from work Mike Sylvester. Since it’s become a hobby during the non-winter months I do a 18-25 mile ride on a sunday to clear my mind and burn off some calories. I’ve only ever done a 50 miles ride previously 2 years ago and it was a killer…

Why is SpecialEffect my chosen charity?

The work that SpecialEffect is amazing the same way the majority of work charities do but the first time I heard of SpecialEffect from a Frontier Development’s 24 Charity Live Stream it really rung true to my heart.

As I grew up as a small child my older cousin Richard was
diagnosed with Muscular Dystrophy , this put a lot of pressure on my family and as his symptoms became worse it became a family tradition to visit him every second Friday night. I loved going over to my Aunty Jackie’s house to see Richard and his brother Russell, I got to watch or play computer games we didn’t have such as Mortal Kombat, Area 51 on the Sega CD and the original Aliens Vs Predator on the long lost Atari Jaguar. I even got to watch some Leisure Suit Larry which at the time I was probably 12 years to young to understand.

As Richard’s condition got worse I saw him go from being in a wheelchair quite happily tapping away on consoles and his laptop, to losing the use of his arms to where he used to play Civilisation with a wooden spoon in his mouth to press the keys. Even during that time he entertained a young me by speaking with silly voices and rolling his eyes endlessly, he always had time for people. Not long after Richard passed away.

Speaking with my Aunty Jackie about my plan to do this, she told me when he realised what was happening to him, his wish was to not be forgotten. So this is why I do this Richard, for you.